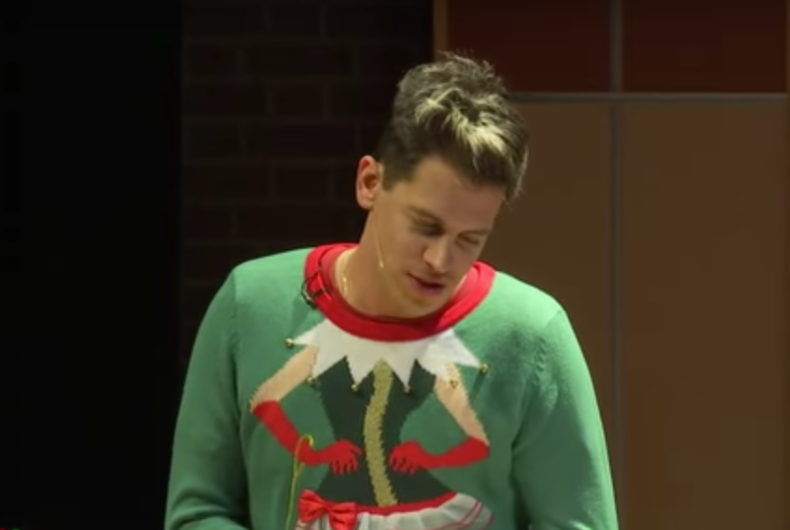 Breitbart editor and poster-boy for the anti-PC movement Milo Yiannopoulos continued his harassment of a University of Wisconsin transgender student during an event at University of Minnesota on Wednesday, Media Matters reports.

At the Wisconsin stop on his “Dangerous Faggot” speaking tour, he shared a photo of transgender UW Milwaukee student Adelaide Kramer, who had advocated for her right to use the women’s locker rooms, on the screen while berating her and transgender people in general.

“This quote unquote non-binary trans woman forced his way into the women’s locker rooms this year,” he said as Kramer sat in the room in shock. “I’ve known some passing trannies, they have no problem changing in the women’s locker room. But Justine isn’t even trying… I can tell, because I’d still just about do him… the ULTIMATE sign he doesn’t pass.”

But once wasn’t enough. At his next speaking event in Minnesota, he brought up Kramer again, continuing to misgender her and sexualize her desire to use the appropriate changing facilities.

“This young man was desperate for a bit of tit and minge [a vulgar slang term for labia/pubic hair],” Yoiannopoulos said. “Now he created a terrible fuss, an awful fuss, when I put his name up there and so did the president of that university. But it turns out, he’s going to quit the university.”

What’s more, he interpreted Kramer’s decision to not return to campus as a victory for feminism, and himself as victor.

“So I have become a sort of second wave feminist icon, protecting women from men in their locker rooms,” he said. “Well, you’re welcome, feminism.”

Yiannopoulos went on criticize the characterization of his words as “violent” and suggested Kramer should learn to take a joke.

“Adelaide, good lord, went to the press and said I had used violent words as though violent words were a thing,” he said. “What the fuck is a violent word? If you can’t take a joke, how are you going to deal with having your dick cut off?”

Yiannopoulos was scheduled to speak on Friday at North Dakota State University, but his appearance was cancelled earlier this month due to safety concerns.

“I’m sorry to announce that the North Dakota event has been cancelled following threats to me and the student organizers from the protestors currently shooting at police down at the pipeline,” he claimed. “Normally I have no problem being shot in the face by masked assailants but in this case we couldn’t risk student safety. I might have to go visit these ridiculous troublemakers at the pipeline itself. Anyone know where I can buy a water cannon?”

Yiannopoulos is scheduled to finish his tour in the new year with events on the west coast.