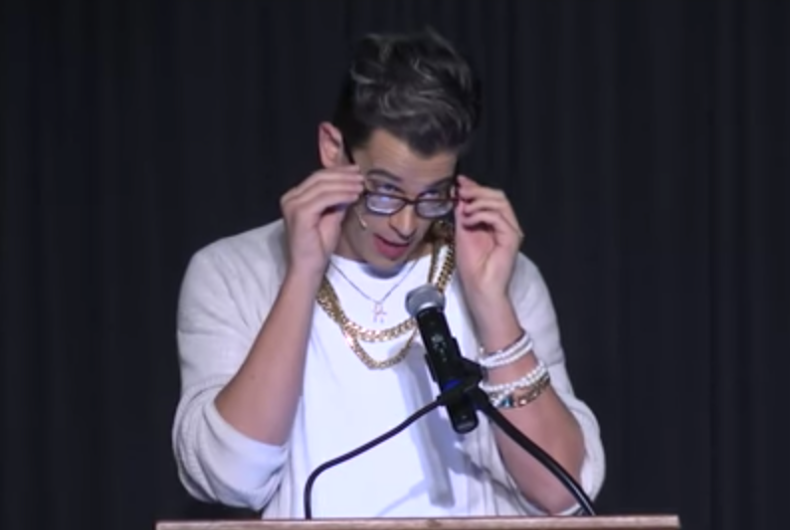 Breitbart editor and homocon Milo Yiannopoulos has made a name for himself by using his megaphone to spread hate, but he stooped to a new low during a recent speaking engagement at University of Wisconsin-Milwaukee.

After complaining about the school’s “Just Words” campaign to raise awareness about the impact of language, Yiannopoulos tore into objections to the phrase “man up,” alleging those opposed are attacking men.

“‘Man up’ is a big no no for liberals, intent on eliminating masculinity from our culture. Toxic masculinity and rape culture and all the other idiotic things they like to say in their war against men,” Yiannopoulos said. “I’ll tell you one UW Milwaukee student that doesn’t need to man up, Justine Kramer.”

He then shared a photo of Adelaide Kramer (Justine is a former name), who was apparently in the audience at the time, on the screen while he proceeded to berate her. Kramer made headlines earlier this year when she objected to being barred from the women’s locker room at the school’s gym.

Yiannopolous went on to misgender Kramer, using anti-trans slurs and accusing her of not trying hard enough to “pass:”

This quote unquote non-binary trans woman forced his way into the women’s locker rooms this year.

He got into the women’s room the way liberals always operate, using the government and the courts to weasel their way in where they don’t belong. In this case he made a Title IX complaint.  You know, Title IX, the set of rules to protect women on campus? Now they protect trannies in your bathrooms instead.

I’ve known some passing trannies, they have no problem changing in the women’s locker room. But Justine isn’t even trying… I can tell, because I’d still just about do him… the ULTIMATE sign he doesn’t pass.

Kramer said in a letter to UWM Chancelor Mark Mone that while she expected Yiannopoulos to make racist and transphobic comments, she never anticipated she’d be personally targeted.

“I’m sitting there and I hear him say ‘Justine Kramer’ and I just froze up. I have never, ever,
ever been more terrified in my life of being outed. Ever,” she recalled. “And I am sitting there frozen in total terror that somebody around me would recognize me, point me out, and incite the mob of the room against me. Nobody did point me out, thank god. But do you have ANY idea how much power Milo had and how it feels to pray that your ability to ‘pass’ doesn’t fail you now?”

In his response to the protests sparked by Yiannopoulos’ appearance, the chancellor defended UWM hosting the event.

“Free speech is one of UWM’s core values and I will support students’ decisions to bring a wide array of speakers to our campus — even if the speaker is controversial, and even if I disagree with him or her,” he said. “One of the core tenets of public universities is learning about the world by communicating with people who think differently than we do.”
He also spoke out against the targeting of a transgender student and the “encouragement of hate and harassment.”
“I do not agree with Yiannopoulos’ views, and I strongly condemn the belittling of others and their appearance, and the encouragement of hate and harassment,” Mone explained. “I also will not stand silently by when a member of our campus community is personally and wrongly attacked. I am disappointed that this speaker chose to attack a transgender student.”

But Kramer objected to what she called “lip service” from the chancellor and wrote him a scathing rebuke — one that she copied to more than 400 members of the University community.

“Do you have any fucking idea how hurtful this is? Do you know what it’s like to be in a room full of people who are laughing at you as if you’re some sort of perverted freak, and how many of them would have hollered at me (or worse) if I was outed? Do you know what this kind of terror is?” she asked in the strongly worded email.

Watch video of Yiannopoulos’ speech below, or read a version of his remarks here.
News
Breitbart, Milo Yiannopoulos, Milwaukee, Transgender, University of Wisconsin

Face it, Pope Francis, the Catholic Church is a gay institution