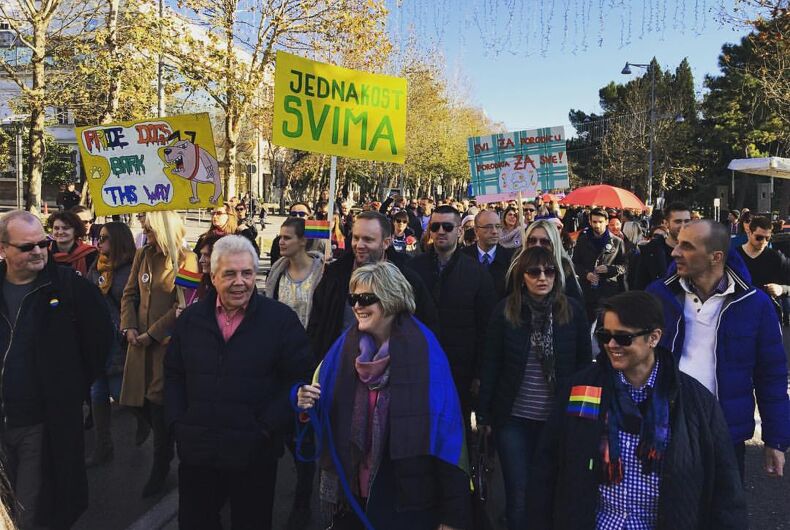 POGORICA, Montenegro (AP) — Dozens of people participated in a LGBTQ pride event in highly conservative Montenegro where authorities are promising to boost gay rights as part of efforts to join the European Union.

Hundreds of policemen deployed Saturday in downtown Podgorica, the capital, to prevent possible attacks from extremists. Participants in the pride march carried banners reading “born this way” or “equality for everyone.”

Activist Danijel Kalezic says Montenegrin gays no longer want to hide. “We don’t have enough support from our fathers, mothers, siblings or relatives,” he said.

Montenegro’s government has announced plans to introduce gay partnership as part of its pro-EU agenda. Montenegro, like much of the Balkans, has a strong macho male culture with little tolerance for gays, who often face harassment or attacks from right-wing or hooligan groups.

Initial pride events several years ago were marred with incidents.

Several hundred people shouting “Kill the gays” attacked gay activists and clashed with police in a bid to disrupt the first ever pride event in 2013. Angry assailants threw rocks, bottles, glasses and various other objects – including chairs from local cafes – at several dozen flag-waving gay activists who shouted back “Kiss the gays.”

The following year, protected by hundreds of riot police, about 200 gay activists marched peacefully in Montenegro, carrying banners reading “Let’s Love Each Other” or “This is Just Beginning.”