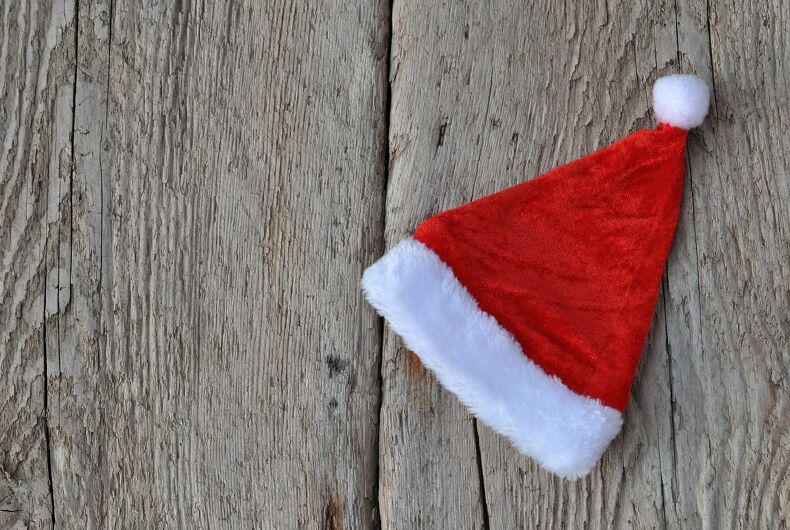 Breaking news: Santa Clause, of unknown age, was shot and killed by home owner, Jack Koff, 41, for allegedly breaking into and entering his residence at 007 Patriarchy Lane without authorization. The deceased was found wearing a bright red cap and full-body microfiber suit with white piping around the collar, sleeves, and pant legs. He also sported a full white beard and bushy eyebrows.

Though no weapon was found at the scene, tossed near the bullet-riddled body was a large canvas bag filled with brightly colored wrapped packages. Police department evidence officials later discovered that the boxes were filled with children’s toys.

According to police Lieutenant Justin Tyme, “We have clear indication that Mr. Clause penetrated the home by shimmying down the chimney. We believe this because his clothing contained large amounts of ash and grime.”

Responding to reporters’ questions on the porch of his home, Koff stated that around 3 am on the morning of December 25, while he and his wife and three lovely children were asleep on the second floor of their residence, he was startled out of a deep sleep by the apparent sounds of a pack of animals walking across the roof. Fearing a home invasion, Koff took his AK 47 rifle from his bedroom closet and walked slowly and silently down the stairs. As he reached the living room, he saw the image of an intruder exiting the fireplace.

“I took aim and fired a number of rounds into the guy,” said Koff. “I have three young kids, and I’m not going to let some pansy pervert come into my home.”

The town coroner, Helen A. Basket, determined that Clause died instantly with numerous bullet wounds to the head and upper back with one puncturing his heart. At a press conference held later in the day, Police Chief Reed Mylipps indicated that while the incident is still under investigation, at this point his department does not intend to press charges against Mr. Koff since it appears to be a case of justifiable homicide.

Clause leaves behind a wife, nine flying reindeer — one with a bright red nose — and a gaggle of elves. The coroner’s office shipped the body back to his home at the North Pole where Ms. Clause will bury him on New Year’s Day in a private ceremony.

This is the second incidence of the shooting deaths of home invaders on Patriarchy Lane in just the last three days. On Tuesday, home owner Lance Boyle killed M&M Red and M&M Green as they filled bowls around his house with what appeared to be sweet chocolate centers – some which included peanuts – surrounded by hard candy shells. Boyle splattered Red and Green’s little bodies on the walls and ceiling of his living and dining rooms leaving nothing for the coroner to autopsy.

“The justifiable shootings of Clause, and M&M Red and Green prove our point when we rightfully argue that ‘The only thing that blows away a bad dude with or without a gun is a good dude with a gun!’”

La Schmuck urged the relatively few home and apartment dwellers who have not already purchased at least one hand gun, one hunting rifle, and one semi-automatic firearm to run to the gun stores and buy them soon. He reminded parents that weapons not only save lives, but firearms also provide great ways to bond with their children.

“There’s nothing greater than pulverizing paper and clay targets on the shooting range with your kids on the weekends,” he said. “This is real quality time.”

The United States ranks number 1 of 178 countries researched in 2014 for the highest rate of firearms with 112.6 per 100 residents, with Serbia coming in a distant second at 69.7, Yemen third at 54.8, and Switzerland forth at 45.7. On “Black Friday” after Thanksgiving 2015, requests for firearms background checks reached historic proportions with over 185,000 on this single day.

According to La Schmuck, “Keep up the great work America!”