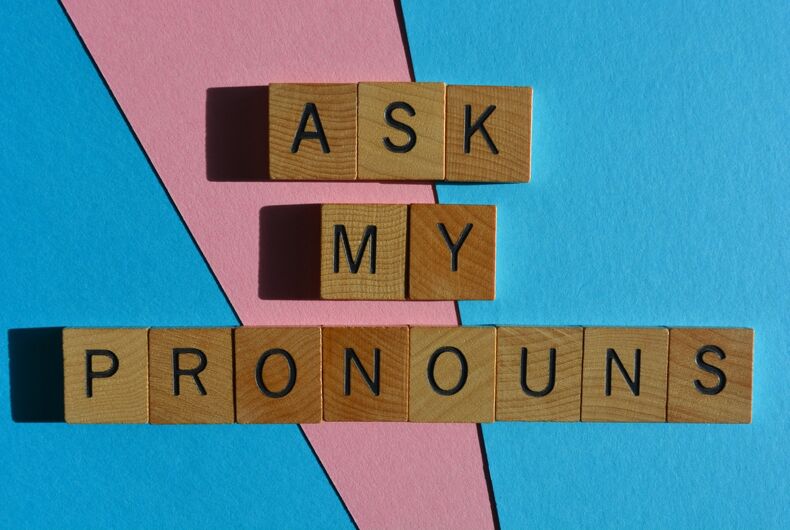 When Elliot Page came out as trans in December of 2020, he announced that his preferred pronouns were “he” and “they”. In doing so, he joined the ranks of other celebrities who have accepted “rolling pronouns”, including The Crown’s Emma Corrin (she/they), My Chemical Romance vocalist Gerard Way (he/they), Grey’s Anatomy star Sara Ramirez (she/they), and singer Kehlani (she/they).

But what exactly are rolling pronouns, and why do some people prefer them over a single set? And how do you use them respectfully? Keep reading to find out.

Related: Why should we be adding pronouns to our email signatures?

What Are Rolling Pronouns?

Rolling pronouns refer to the use of multiple pronouns that can be used alternately or shift over time. Typically, people who prefer using multiple sets of pronouns also encourage others to rotate through all of them or mix them around when speaking to or referring to them.

According to the 2020 Gender Census, roughly a third of transgender and non-binary people prefer to use two sets of pronouns. Over 10 percent stated that they were happy with even three or more sets.

For example, a person who identifies as a non-binary lesbian may want to affirm that, despite identifying as non-binary, they still feel connected to some parts of their womanhood or femininity – especially their lesbian identity. Thus, they may opt to use she/they pronouns.

For genderfluid people, multiple pronouns are necessary for affirming their fluctuating gender identity. For example, Jonathan Van Ness of Queer Eye fame, who uses she/he/they pronouns, explains, “The older I get, the more I think that I’m nonbinary – I’m gender non-conforming. Like, some days I feel like a man, but then other days I feel like a woman.”

Others use rolling pronouns as an act of defiance in a society that demands to binarize gender or try to fit it into neat categories. For those who believe that gender (at least in the way they experience it) is not fixed, using multiple pronouns is a way of dismantling oppressive gender roles and norms.

What Does She/They Mean?

She/they pronouns are pronouns that are often used by non-binary people who are assigned female at birth as well as transfeminine people. Usually, people use she/they pronouns to signify their connection with femininity while affirming their non-binary identity.

Writer and podcast host Ada Powers explains their use of she/they pronouns as follows: “I identify as a woman, but also as nonbinary. I don’t feel womanhood tells my full story, but I’m not fully divested from it, either.” But another person may use the same pronouns to communicate something else, such as “She/her is fine, but I also use they/them and would probably appreciate getting they/them’d from time to time.”

What Does He/They Mean?

He/they pronouns are typically used by non-binary people who are assigned male at birth or transmasculine people. Just like with she/they pronouns, people may use he/they pronouns to honor their connection to their masculinity while signifying the importance of recognizing their non-binary or genderfluid identity.

How To Use Rolling Pronouns

Rolling pronouns can be rotated or alternated within the same sentence, from one sentence to another, or from conversation to conversation. But how do you know just when to alternate the use of each pronoun set?

It depends on the person. Some people prefer to have their pronouns used alternately throughout a conversation or a text. For example, “He’s coming to the party. They just got caught up at work.” But others may prefer one pronoun set over another on different days. This is particularly true for genderfluid folks, who fluctuate from one gender identity to another.

The bottom line? Just ask. If someone tells you they use multiple sets of pronouns, make sure to ask them how they prefer to be referenced. Some folks will have a main set of choices that you can use consistently, while others will be more firm on the use of all pronouns alternately. Don’t just assume based on their appearance or their behavior or even the way others have referred to them in the past.

To understand why pronouns matter so much to trans and gender non-conforming people, it’s important to understand gender dysphoria or the feeling of distress or discomfort that comes from the disconnect between one’s assigned sex at birth and one’s gender identity. For people who suffer from dysphoria, having a name or a pronoun that doesn’t match your identity can feel really uncomfortable – painful, even.

In fact, studies have found that deliberate acts of misgendering or dead-naming (using the wrong pronouns or the original name) of trans and gender non-conforming people are linked to higher incidences of depression, anxiety, and suicidal ideation.

Pronouns and chosen names help to affirm a person’s identity and personal conception of their true selves. To deny someone of their preferred name and pronouns would be like to deny them their identity.

If you want to do right by your trans and gender non-conforming friends, the easiest thing you can do is to honor their preferred pronouns and chosen names. It’s as simple as that. Never deliberately misgender or dead-name your friends or anyone else whose name and pronouns you’re aware of.

Don’t know someone’s preferred pronouns? When meeting someone for the first time, it’s always best to introduce yourself by giving your name and your own preferred pronouns. That gives the other person a clear indication that you’re someone who can be trusted to respect their pronouns, as well as prompts them to introduce their own if they so please.

Note that not everyone is in favor of asking others their personal pronouns, especially in a public setting. This is because some folks may still be in the process of discovering their gender identity, while others may not want to out themselves just yet.

Aside from this, there are a few more ways you can be a proper ally to folks who use rolling pronouns, including:

Related: Kevin Sorbo mocked for “Herculean stupidity” because he didn’t know what pronouns are

“Little Women” author Louisa May Alcott was a transgender man