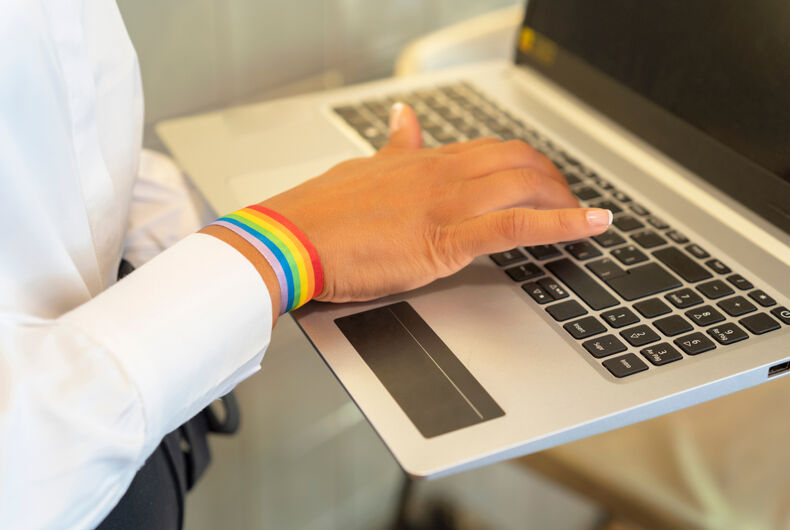 Despite all the progress made by the LGBTQ community, about half of LGBTQ people still feel the need to hide who they are at work. And this has reverberating effects – 25 percent of employees feel distracted from their work, 17 percent are exhausted from expending all their energy hiding their gender identity, and a third of all LGBTQ employees feel depressed at work.

The good news is that there are ways for LGBTQ employees, allies, and employers to cultivate a more inclusive work environment. One of the most recent trends – seen outside of the workplace as well – is the act of adding one’s gender pronouns to their email signature. While it’s a seemingly small gesture, a lot of people believe it can create a lasting impact on both LGBTQ workers’ well-being at work, and on workplaces’ cultures of inclusivity as well.

What Are Gender Pronouns?

Also called “preferred gender pronouns” or “personal pronouns”, gender pronouns are words we substitute for our own and other people’s names. Examples include “he/him/his”, “she/her/hers”, and “they/them/theirs”, the latter of which is often used by non-binary people.

Most people, particularly cisgender people whose gender expression matches their gender identity, don’t think about their pronouns. Because for the most part, others tend to get their pronouns right most of the time. But for a lot of transgender and non-binary individuals, pronouns can be a source of stress, anxiety, and dysphoria – particularly when others get their pronouns wrong, whether intentionally or not.

This is because “pronouns are how we identify ourselves apart from our name”, says GLAAD communications officer Mary Emily O’Hara. “And when you’re speaking to people, it’s a really simple way to affirm their identity”.

The practice is said to have started in academic and non-profit circles and has quickly been adopted by millennials and Gen Zs. It’s no surprise, as Gen Z is considered as the generation that has the most number of out LGBTQ-identifying people, as well as being the most conscientious generation yet.

As the practice has become more commonplace, and as more zoomers enter the workforce, the corporate world seems to have caught on as well, with more and more companies encouraging or even mandating their employees to add gender pronouns to their company email signatures. But why include your pronouns in your email signature in the first place?

The Benefits Of Adding Your Pronouns To Your Email Signature

There are a couple of reasons why adding pronouns in email signatures could be a good thing. Here are just a few:

Misgendering is defined as labeling someone as a gender other than that person’s gender identity. Even if you don’t intend to misgender someone, it can happen fairly easily, especially if the other person has a gender neutral name or a name that is unfamiliar to you.

For people who do experience gender dysphoria, or for those who have been intentionally misgendered before, misgendering can be a hurtful experience. So by letting team members add their gender pronouns in email signatures, companies can protect non-binary and transgender people from the pain of being accidentally misgendered.

According to LGBTQ Inclusion Consultant Gina Battye, when you include gender pronouns in your email signature, you “create a safe space so everyone can bring their whole self to work”.

As mentioned earlier, about half of LGBTQ adults feel as if they need to hide their sexual orientation and gender identity at work. But by initiating the addition of your pronoun preference to your email signature and social media bios, you send a signal to your LGBTQ co-workers that you’re someone who a.) understands and respects the significance of gender pronouns for trans and non-binary people, and b.) can be a trusted confidant and refuge for gender equality and diversity issues in the workplace.

In a sense, you’re vocalizing your inclusion and affirming your LGBTQ colleagues at the same time.

It Normalizes Discussions About Gender

A lot of people are still afraid to have open and honest discussions about gender in the workplace. In fact, not everyone will understand what gender pronouns are, what they’re for, and why they matter. But that’s precisely why it’s important to introduce them to the workplace. In doing so, you help to create opportunities to educate potential allies (and even LGBTQ employees) about things like sexual orientation, sex assigned at birth, gender identity, gender expression, etc.

The Drawbacks Of Putting Pronouns In Email Signatures

While adding your own pronouns to your signature can reap a lot of benefits, there are some potential downsides to it too. One of the biggest concerns that people in the LGBTQ community have about mandating introducing personal pronouns is that it makes people vulnerable to getting outed when they’re not ready.

Imagine you’re a trans woman who has yet to transition socially and you don’t feel as if you’re ready to come out to friends and family yet. Then your employer sets a “pronouns in email signature policy”. This puts you in a compromising position. Do you lie to your boss and co-workers about your gender identity? Or do you risk outing yourself when you know you’re not emotionally ready to have that conversation with your colleagues yet?

Ultimately, you don’t want to force anyone to come out when they’re not ready yet. And so, instead of making it a company-wide policy to add pronouns to your email signatures, it may be best to simply encourage the act and to highlight the benefits.

How To Add Your Pronouns To Your Email Signature

There are many ways to go about this. Here are some popular ways of doing it:

How To Ask Someone What Their Pronouns Are

If you’re speaking to someone who doesn’t include gender pronouns in their email signature and you want to make sure to get their pronouns right, there are some ways of going about it without offending or making the other person feel comfortable.

One of the easiest ways to bring up gender pronouns without outright asking or nagging the other person to reveal their own is by introducing yours first. So, for example, you can say, “Hi, my name is Helena. My pronouns are she/her/hers and they/them/theirs. What are your pronouns?”

Essentially, you give the other person the choice to accept your offer to discuss their own pronouns or to keep them to themselves for the time being.

Why Add Pronouns To Email Signatures?

Email signature pronouns are great for a number of reasons. They help trans and non-binary colleagues feel safer about opening up about their gender identities. It also helps colleagues avoid misgendering and hurting one another.

However, not everyone is comfortable putting their gender pronouns in email signatures. At the end of the day, it’s all about creating an environment where LGBTQ employees feel free to be themselves.