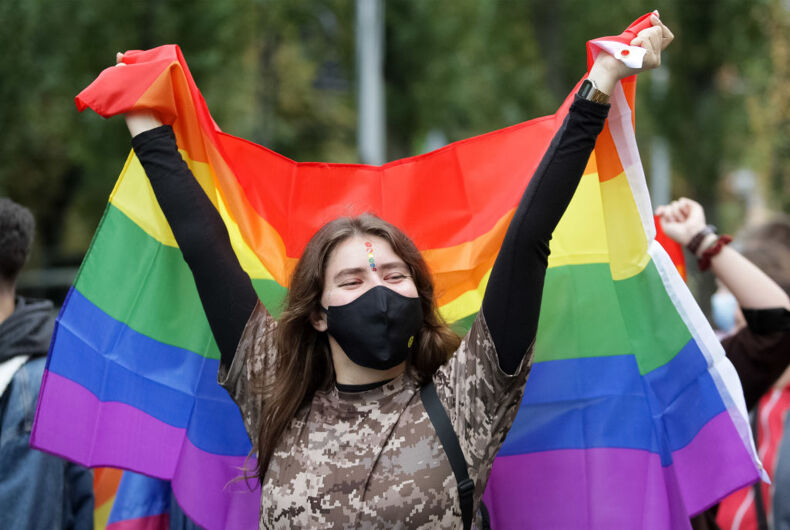 KYIV, UKRAINE - 2021/09/19: A woman wearing a face mask carries a rainbow flag during the Equality March KyivPride 2021 of the LGBT community. Thousands of participants turned up in Kiev for the annual Gay Pride parade or March of Equality.Photo: SOPA Images/LightRocket via Gett

LGBTQ Ukrainians captured a group of AWOL Russian soldiers hiding in a basement in the Ukrainian city of Kharkiv.

LGBTQ activist Viktor Pylypenko said that the soldiers didn’t realize the basement they had chosen to hunker down in was also the office of a local LGBTQ group.

Pylypenko, a veteran who rejoined the army last week to aid in Ukrainian defense from Russia, said the LGBTQ group members both beat and captured the soldiers.

“We are confronting a tyrannical, homophobic enemy,” Pylypenko said.

Since Russian President Vladimir Putin’s invasion, LGBTQ Ukrainians have been terrified for their future.

Marriage equality is not legal in Russia, nor do anti-discrimination protections exist for LGBTQ people. The country is also infamous for its “gay propaganda” law, which was signed by Putin in June 2013 and prohibits the distribution/marketing of any LGBTQ content deemed “harmful” to minors.

But as is the case with so many Ukrainian citizens right now, LGBTQ Ukrainians are stepping up to fight.

Veronika Limina, for example, works for an NGO that promotes LGBTQ rights in the military and has been running a camp to teach LGBTQ volunteer cadets the skills they need to fight.

“I am angry,” she told The Daily Beast. “We will kill Putin.”

“Many LGBT+ activists, who have an experience of participation in the Euromaidan events, are joining the Territorial Defense forces or holding training in paramedical help,” she added. “LGBT+ people who served in the army and military volunteers are ready to come back to their service. We are doing the same as the rest of the nation.”

Why should we be adding pronouns to our email signatures?