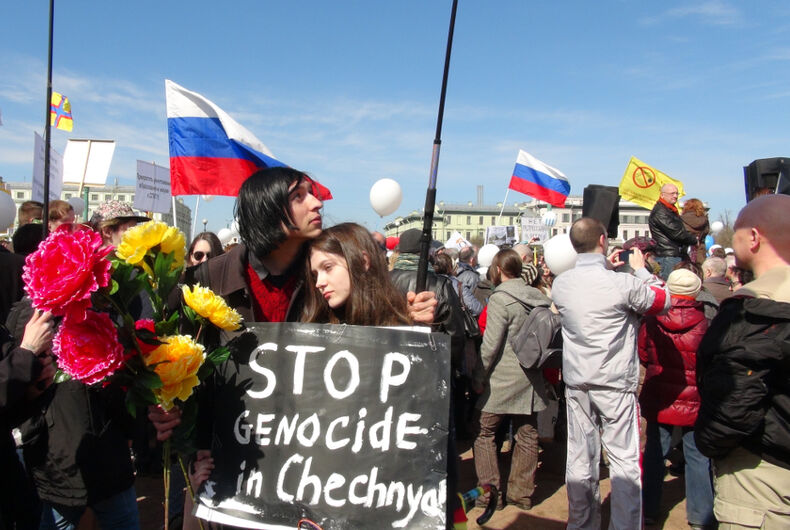 One of the leaders responsible for the horrific anti-LGBTQ “purge” that has taken place in Chechnya was killed in Ukraine on Saturday.

Magomed Tushayev was a top advisor to the Chechen head of state, Ramzan Kadyrov, who has overseen a horrific “purge” of LGBTQ people. Gay men and transgender people have been tortured and murdered at the hands of authorities.

Tushayev was directly involved in this campaign to eliminate LGBTQ people, according to the Los Angeles Blade.

His last known involvement took place in May 2021, when Chechen operatives abducted gay human rights activist Ibragim Selimkhanov from a train station in Moscow and forcibly brought him to Chechnya to question him about journalists and other activists who were helping LGBTQ people. Selimkhanov ultimately escaped and made it back to Moscow.

Tushayev’s role in the abduction is unknown, but human rights organizations have confirmed his involvement.

Chechen authorities — most of whom are former military members who serve as the Chechen leader Ramzan Kadyrov’s secret police force — often detain suspected queer men under the pretense of drug charges. Police then examine the men’s phones contacts for other suspects, using torture to get as much info as possible.

Women have been caught in the crackdown too, though they’re often left to their families to be abused, imprisoned, or killed. Chechen authorities subscribe to the Stalinist idea of “shared responsibility,” blaming families for raising “public enemies” and punishing them if they don’t help persecute and murder relatives in so-called “honor killings.”

Families can also be imprisoned, harassed, jailed, blackmailed, or killed if their suspected LGBTQ family members flee the region.

Chechyna is a Russian republic and Kadyrov has deployed Chechen fighters to Ukraine to assist in Putin’s efforts.

“The president [Putin] took the right decision and we will carry out his orders under any circumstances,” said Kadyrov.

Tushayev was head of the 141 motorized regiment of the Chechnya National Guard when he was killed during a battle to take over an international cargo airport near Kyiv.