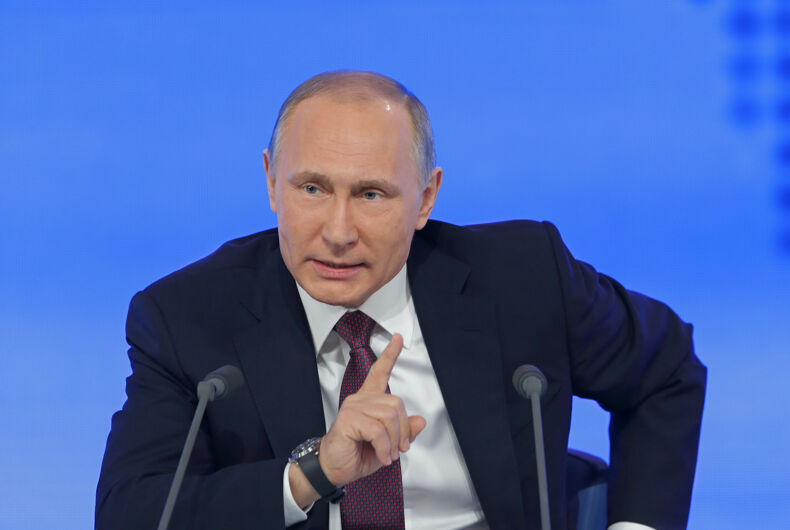 For years, the religious right has been in love with Vladimir Putin. Nearly a decade ago, long before Donald Trump appeared on the political scene, anti-LGBTQ leaders like Franklin Graham, Scott Lively and Bryan Fischer were falling all over themselves to proclaim their affection for the authoritarian paradise that the Russian dictator had created.

So what happens now that Putin has invaded Ukraine? Does the religious right still think that his anti-LGBTQ policies sanctify his attack on another nation?

Putin’s actions put the religious right in a bit of a bind. There aren’t a lot of high-profile political figures who are defending Putin. Most Republican leaders are condemning the invasion in strong terms, largely by blaming President Biden for some unidentified “weakness.”

The religious right idolized Putin because he targeted LGBTQ people. Russia’s anti-LGBTQ laws were a “good thing” that “most of the people in the United States” would support, Austin Ruse of the Catholic Family and Human Rights Institute (C-FAM), insisted.

Lively, who fueled the homophobia that led to Uganda’s law to make homosexuality a crime punishable by death, regularly visited Russia and once described it as  a “beacon of freedom.”

The appearance of Donald Trump as the GOP standard-bearer only solidified that love of Russia. Trump favored Putin’s word over his own intelligence officers, despite all the evidence of Russia’s interference in the 2016 presidential election.

Trump is still lauding Putin, but he’s largely alone. Of course, there’s always Tucker Carlson, who seems to be auditioning for a primetime spot on Russian television (which he’s already getting). In the days leading up the invasion, the Fox News commentator said he had nothing against Putin since Putin had never tried to get him fired, unlike the demonic libs.

But Carlson is pretty much the only big name willing to back Putin, and even he’s backpedaling a little. There are other fringe characters, like Tulsi Gabbard, who have been justifying Putin’s behavior in the lead-up to the invasion. But for the most part, political figures are condemning the invasion.

That doesn’t mean that the religious right will abandon its pal, Putin. Just days before the invasion, Franklin Graham issued a plea to his followers: “Pray for President Putin,”

Graham has long had a cozy relationship with Putin, having met with him privately multiple times. Graham doesn’t seem to be letting the invasion of Ukraine get in his way of that relationship, tweeting that his charity, Samaritan’s Purse, has “many friends in both Ukraine and Russia.”

For now, most conservative evangelical leaders are just lying low. But there is a handful among their ranks who have criticized their behavior all along and are calling them out now. Chief among them is Russell Moore, who was a leader in the Southern Baptist Convention before he was forced out for putting God before Trump.

In a recent article, Moore warned his fellow believers of the danger of  “blessing an authoritarian leader, like Putin, who is known by his own people for poisoning his enemies.”

Of course, Moore tried to warn his colleagues about the dangers that Trump represented, only to find himself in exile. After a decade of believing that authoritarianism in Russia was preferable to democracy in the U.S., is there any reason to believe that the religious right will change its collective mind because of the Ukraine invasion?