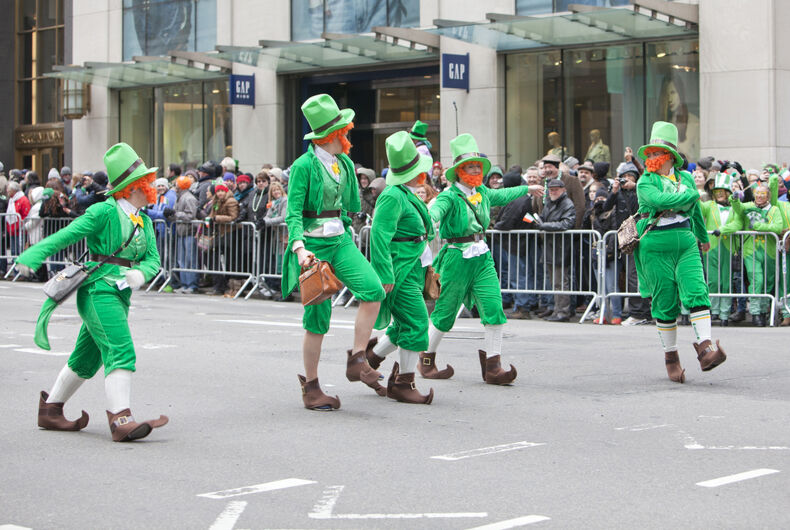 The annual Staten Island St. Patrick’s Day Parade will return this year after COVID-19 kept the annual tradition from taking place in 2021. And in keeping with the parade’s longstanding tradition, LGBTQ people will be banned from participating.

In all caps, the 2022 application form declares, “THIS PARADE IS NOT TO BE USED FOR AND WILL NOT ALLOW POLITICAL OR SEXUAL IDENTIFICATION AGENDAS TO BE PROMOTED. It also states that a group can only march if it “does not stand, in any way, in opposition to, or contradict, the Teachings and Tenets of the Catholic Church.”

Related: Conservatives freak out because teachers won’t be able to look up students’ sexes anymore

For years, parade organizers and LGBTQ activists and allies have battled over these discriminatory policies. LGBTQ people were also banned for 20 years from the parade that takes place in Manhattan – the biggest St. Patrick’s Day Parade in the world – but that ban ended in 2014.

In Staten Island, on the other hand, restrictions only seem to be getting more intense.

Not only have LGBTQ groups been banned from marching, but so have individual people who have expressed any LGBTQ association.

In 2020, Miss Staten Island, Madison L’Insalata, couldn’t march because she came out as bisexual, and Republican City Councilman Joseph Borelli was barred by parade marshals because he had a rainbow pin on his jacket.

“They physically blocked me, my wife and two boys in strollers,” Borelli said at the time, adding, “I didn’t come with it looking for an argument. My friends handed a pin to me. I really didn’t think it was a big affront to the Irish.”

Carol Bullock, executive director of the Pride Center of Staten Island, has spent years applying for the organization to march, despite repeatedly getting rejected. This year was no different.

The president of the parade committee, Larry Cummings, immediately placed her application in the rejection pile when she handed it to him. He then did the same with applications from organizations supporting LGBTQ firefighters and officers.

“That made it a little more painful because you have F.D.N.Y. and N.Y.P.D. people who are protecting our community, but they can’t march in a parade,” Bullock told the New York Times.

“Our parade is for Irish heritage and culture,” Cummings reportedly told The Irish Voice in 2018. “It is not a political or sexual identification parade.”

As a result of these stringent policies, many New York officials refuse to attend the Staten Island parade, including Mayor Eric Adams as well as Staten Island District Attorney Michael E. McMahon.

“We are still hopeful that the organizers of the Staten Island St. Patrick’s Day Parade will see the need for inclusion in our celebrations of cultural heritage and allow members of the LGBTQ+ community to participate,” said Adams spokesperson Fabien Levy. “Until that time, the mayor will not participate in the parade.”