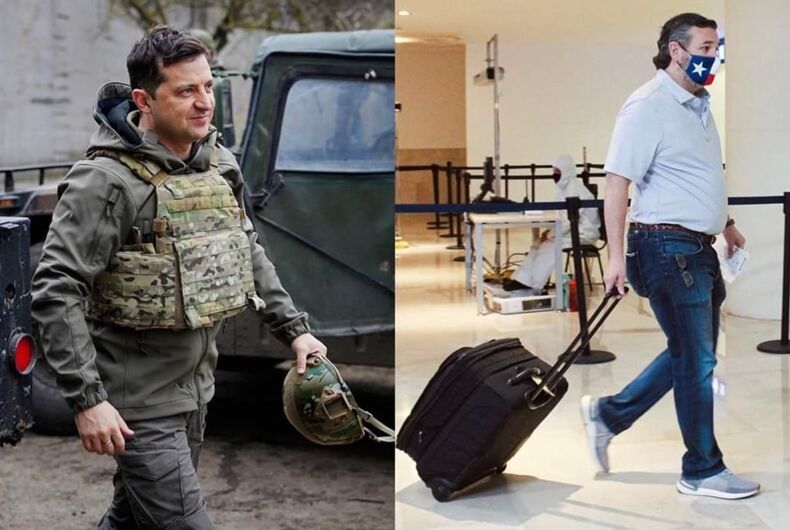 Photos of Ukrainian President Volodymyr Zelensky and Sen. Ted Cruz (R-TX) are circulating online as a side-by-side profile in courage.

In the two photos, Zelensky is touring troops while Cruz is shown slinking home from Cancun after abandoning his freezing constituents during a bitter cold snap that shut down the state of Texas.

A terrifying winter storm knocked out power and gas to millions, stranding Texans without heat, water, and shelter. While state officials scrambled to find solutions during the unusually cold weather, Sen. Cruz decided it was a good time to vacation in Cancun with his family. After being busted by other travelers and shamed on social media, Cruz returned to the States and blamed his daughters for his decision to flee the state.

Zelensky, on the other hand, is standing firm in the face of a Russian invasion. He has famously refused to flee the war-torn country, announcing that he would rather die or be captured than abandon his fellow citizens. Ukrainians have rallied behind the charismatic leader, with citizens courageously blunting the Russian assault with homemade Molotov cocktails and rifles.

He has become a hero on the national stage, skillfully forcing the West’s hand, while using social media masterfully to promote his pleas for peace and condemnation of Russian atrocities. Zelensky’s openness has inspired the military, western allies, and even the Russian people.

When offered safe transport out of the country by the United States, Zelensky reportedly replied, “The fight is here. I need ammunition, not a ride.” Ted Cruz flew commercial.

The contrast has been commented on widely on social media with posts and tweets racking up millions of likes, shares, and comments across the platforms.

“The Ukranians have heros like Zelensky. We have parasites like cruz, graham, trump,” Bob Newman tweeted in response to Ana Navarro-Cárdenas. The political commentator had tweeted the two pictures with the caption “When your country is faced with crisis:”.

“Our country is filled with lying flip-flopping ‘leaders’ like Trump, Cruz, & Graham,” Honest Ann posted. “I’d like to replace them all with one Zelensky.”

“Remember when emasculated Ted Cruz fled to Mexico during a cold freeze of his state, and President Zelensky refused to evacuate during an illegal invasion of his country?” another asked.

Sandy summed up the general feeling well, quipping, “The difference between a courageous hero and a cowardly putz.”

The Ukranians have heros like Zelensky.
We have parasites like cruz, graham, trump.
And we have a tremedous ignorance and trust problem that needs to be dealt with.
Nothing will change until people understand truth vs lies, manipulation vs influence.

Remember when emasculated Ted Cruz fled to Mexico during a cold freeze of his state, and President Zelensky refused to evacuate during an illegal invasion of his country.

Our country is filled with lying flip-flopping “leaders” like Trump, Cruz, & Graham. I’d like to replace them all with one Zelensky. pic.twitter.com/ELLxblt5Yi

This tweet is so profound. We used to have ppl in the Senate that were like Zelensky. Politicians that cared for our country and had pride in our ppl. Now we have Ted Cruz. Matt Gaetz. MTG. Mitch McConnell. It’s so clear when you look at Ukraine that America has lost something https://t.co/Iv1ywctaXC

Exactly, Sandy, Cruz doesn’t deserve to even be talked about with Zelensky !! https://t.co/nyCQm1Sxg5

I see this and think how sick and tired we all must be if the selfishness and greed of our elected leaders and how we just want a fair shot at a decent life, too. Ted cruz is. Is no Zelensky. He’s a corrupt has been who needs to resign. https://t.co/Wgp47fZe81

Politicians could take notes from Zelensky. He refused the US offer to help him flee the country. It makes me think of trump heading for the bunker & Cruz headed for the sunshine. No Integrity! No Honor!