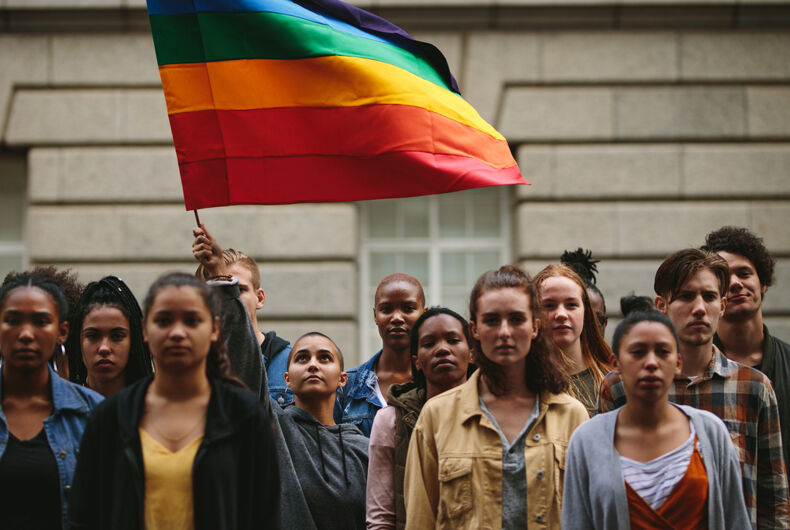 To the shock and horror of the rest of the world, Russia has officially launched a full-scale invasion of Ukraine – and many LGBTQ Ukrainians are terrified for their future.

Marriage equality is not legal in Russia, nor do anti-discrimination protections exist for LGBTQ people. The country is also infamous for its “gay propaganda” law, which was signed by Russian President Vladimir Putin in June 2013 and prohibits the distribution/marketing of any LGBTQ content deemed “harmful” to minors.

A Russian occupation of Ukraine would mean “they won’t allow us to exist peacefully and to fight for our rights as we are able to do that in Ukraine right now,” said Iulia, an 18-year-old law student. This invasion, she added, is “a direct threat to me and especially, well, to me and the person I love.”

A 33-year-old freelance illustrator named Ilulia also expressed fears about what could happen should Russia succeed.

“Even my Twitter profile, it’s enough for them to imprison me. And imprisonment is the best thing that could happen to me in this situation.”

But LGBTQ Ukrainians are fighting back and doing what they can to provide support to the Ukrainian army.

“We have fear, because it’s natural, but we don’t panic,” Reese added. “We donate to the army. I know that like yesterday, the fund to support Ukrainian army, which is helping our army, has reached a maximum in its history for donations. And the Kyiv Pride also posted the call to donate, and I know that LGBT people did it. And I myself donated also for the medical battalions.”

After the invasion began, Kyiv Pride posted a message to Twitter calling on the rest of the world to come together against Putin.

“To all our supporters in the world: Call on your governments to stand up and to take action against the war in Ukraine! We need to stop it now, we need to show how powerful we are all together, and Putin will stand no chance!”

To all our supporters in the world: Call on your governments to stand up and to take action against the war in Ukraine! We need to stop it now, we need to show how powerful we are all together, and Putin will stand no chance!

According to translations from Pink News, the organization also tweeted messages of strength and solidarity.

“We remain strong, we are not intimidated.”

“Putin will break all his teeth trying to bite us. We have left far behind the past to which he seeks to draw us. We are a country that has chosen the values of human rights, humanity, life and personality.”

“We will never give up, still the victory will be ours. Keep calm, we will win together.”

QUA, an organization that supports LGBTQ Ukrainians living in America, announced a protest at New York City’s historic Stonewall Inn this Saturday to stand up against “Putin’s ongoing aggression and the threat it poses to the queer movement in Ukraine.”

The organization also issued a call to action for LGBTQ organizations across both the United States and Europe “to use their considerable voices to raise awareness of the threat a Russian invasion poses to queer Ukrainians.”

“Once again Putin and Russia have decided to rob Ukraine of its sovereignty and claim ownership of Ukrainian people,” said QUA co-founder Bogdan Globa in a statement. “Thousands of our brothers and sisters are under attack; Ukraine, as the only truly democratic former republic in the region, is under threat.”

“If we still believe in freedom and democracy, we must stand in solidarity with Ukrainian society at this challenging and dark moment in Ukraine’s history.”

Hate church called for death to gay people. Now they’re getting what they deserve.