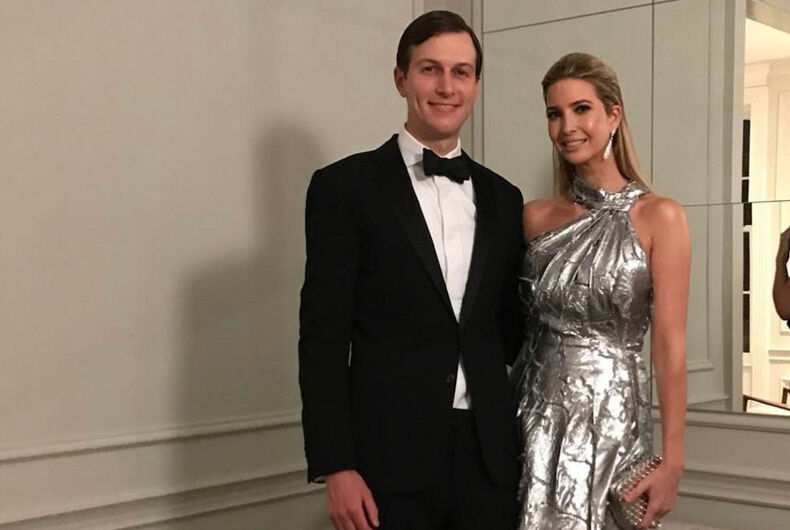 Ivanka Trump and her husband, and adviser to the president, Jared Kushner. Photo: Instagram

We may have Ivanka Trump and Jared Kushner to thank for stopping, or at least slowing down, progress on an anti-LGBTQ executive order from the Trump administration.

Politico reports that “multiple sources close to the situation” have told them that the couple led efforts to stop the effort.

They write that “two sources close to Kushner and Ivanka Trump, who have in the past been supporters of gay rights, said the young couple were both in favor of putting out a clear statement from the president, promising to uphold the 2014 Obama executive order and stopping the momentum for the turnaround in its tracks.”

Since LGBTQ Nation broke the story on Monday about a reported “religious freedom” executive order in the works that President Trump might sign as early as this week, effectively rolling back protections gained for federal employees through a Barack Obama executive order as well as opening up discrimination in a number of areas, there have been ongoing statements from both the White House and LGBTQ rights groups.

When a reporter from the Washington Blade asked Spicer about it, he dodged the question, saying they weren’t going to get too far out ahead of themselves on announcing possible executive orders. NBC News then received a statement from a White House spokesperson saying that such an order was not “the plan at this time.”

Then, the White House released a statement pledging not to overturn Obama’s executive order.

“President Trump continues to be respectful and supportive of L.G.B.T.Q. rights, just as he was throughout the election,” the statement read. “The president is proud to have been the first ever G.O.P. nominee to mention the L.G.B.T.Q. community in his nomination acceptance speech, pledging then to protect the community from violence and oppression. The executive order signed in 2014, which protects employees from anti-LGBTQ workplace discrimination while working for federal contractors, will remain intact at the direction of President Donald J. Trump.”

LGBTQ rights advocates remained on alert however, noting that this did not rule out a religious exemption executive order. There was further cause for concern after a draft copy of a drastic executive order that would give the religious right a license to discriminate against LGBTQ people and women was leaked.

Trump also spoke at length about “religious freedom” during his speech at Thursday’s National Prayer Breakfast. Following that speech, Spicer was asked about the rumored executive order once again.

“There are a lot of ideas that are floated out, I mentioned this the last couple days, but that doesn’t mean – part of it, as the president does all the time, he asks for input, he asks for ideas, and on a variety of subjects there are staffing procedures that go on where people have a thought or an idea and it goes through the process,” he said. “But until the president makes up his mind and gives feedback back and decides that’s final, there’s nothing going out.”

But not everyone is ready to roll over, convinced that this fight is done, including those on the far right.

“I think they’re going to address the conflict that exists currently, which would preclude religious organizations from contracting with the federal government,” Tony Perkins, of the Family Research Council, said in an interview. “I feel confident that they have an appreciation of religious freedom, and I’m pretty certain they’re going to address it. I’m talking to people in the Trump administration, and I know they understand the importance of this.”

He added that Vice President Mike Pence was pushing for the executive order, which would make sense considering he tried to pass a Religious Freedom Restoration Act law in Indiana, backpedaling to prevent LGBTQ discrimination only after a severe backlash and threats of boycotts.

“It wouldn’t be surprising to me if there were lots of documents floating around that people wrote, where they thought the administration might go,” said James Carafano, a vice president at the Heritage Foundation, who advised the Trump transition team.

“This president’s number one priority is demonstrating to the people that got him elected that he is doing the people’s business,” said Carafano.

He added that since he didn’t campaign explicitly on rolling back LGBTQ rights, even if he did quietly pledge to sign the First Amendment Defense Act (FADA) should it pass Congress, it would be surprising to see him go after them at this stage in his young presidency.

“For them to put out an executive order that didn’t try and match up with the priorities that he campaigned on would be an unforced error,” said Carafano.