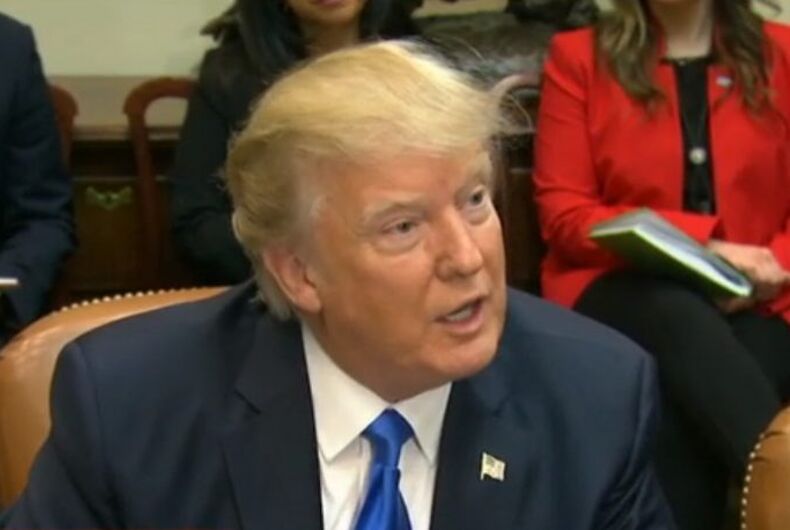 President Donald Trump met with leaders from a number of right wing groups on Wednesday to rally them behind his Supreme Court nominee, Neil Gorsuch.

Among those present include anti-tax activist Grover Norquist; head of the National Rifle Association, Wayne LaPierre; Paula White, Chairman of the Evangelical Advisory Council; David O’Steen, of National Right to Life; Leonard Leo, of the Federalist Society; Margorie Dannenfelser, of the Susan B. Anthony List; and Charmaine Yoest with American Values.

Also present was Tom Collamore with the U.S. Chamber of Commerce.

“You’ve been great friends and supporters and appreciated for, number one, the election.  And I appreciate all of the help in deciding who to pick for the United States Supreme Court,” Trump told them at the start of the meeting.

Trump called Gorsuch “almost perfect” and said he doesn’t know how anyone could oppose him.

“And so I just think it’s really great that we’re having this meeting, because we want to have him go through an elegant process as opposed to a demeaning process,” Trump said. “Because they’re very demeaning on the other side and they want to make you look as bad as possible. And, of course, the press can be very demeaning too, but I’m sure the press will be very dignified in this case.”

Right wing groups have been celebrating the announcement of Gorsuch as Trump’s nominee to the Supreme Court, citing this as proof that they will get what they want out of a Trump administration.

Brian Brown, head of the National Organization for Marriage, wrote in an email to supporters that his group “is in full support” of Gorsuch, noting that NOM’s chairman, John Eastman, was involved in choosing potential court picks for Trump, reports Right Wing Watch.

Tony Perkins, of the Family Research Council, released a statement in favor of the selection, noting in particular Gorsuch’s record on “religious freedom.” Perkins has said he believes Trump will grant a license to discriminate against the LGBTQ community in the form of a “religious freedom” style executive order.

There have been reports of such an executive order, with a story LGBTQ Nation broke when sources close to the situation came forward with information suggesting it could be coming soon. The White House has said they do not have immediate plans for such an order, but a rumored draft was published by The Nation and advocacy groups are still on alert.

Trump also spoke at length about “religious freedom” during Thursday’s speech at the National Prayer Breakfast.

When asked if Sen. Mitch McConnell should “go nuclear” and pass his nomination through with a simple majority, ending a filibuster, if they are unable to secure the needed 60 votes, Trump said he should.

Trump said that “if we end up with the same gridlock that they’ve had in Washington for the last — longer than eight years, in all fairness to President Obama, a lot longer than eight years — but if we end up with that gridlock, I would say, if you can, Mitch, go nuclear.  Because that would be a absolute shame if a man of this quality was caught up in the web.  So I would say it’s up to Mitch, but I would say go for it.”