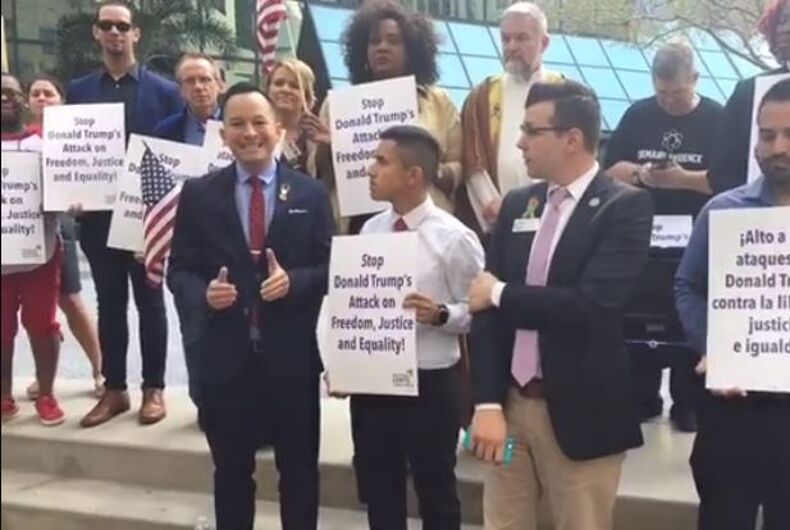 Members of the LGBTQ and religious communities at a press conference in front of Sen. Marco Rubio's office.Photo: Facebook video screenshot

Trump’s order has resulted in protests and rallies throughout the country, including in that same location, reports the Orlando Sentinel.

Smith was joined by Karen Green of New Connections Church and Imam Adurrahman Sykes of Islamic Society Leading American Muslims, as well as members the organizations Equality Florida and QLatinx.

They said they had come to stand “together in solidarity against these un-American and unconstitutional new immigration orders.”

Three people were detained at Orlando International Airport, a student at University of Central Florida was blocked from returning from Iran, and several hundred students at various universities were warned not to leave the country, reports the Orlando Sentinel.

“What these new immigration rules mean for so many different communities is that they have a disproportionate impact on young people…many communities or faith [and] LGBT people of color,” Smith said. “They underscore a commitment to bigotry and Islamophobia and xenophobia that we have not seen in a long time.”

Members of the LGBTQ organizations, Equality Florida and QLatinx, spoke about the rumored “religious freedom” executive order, news of which LGBTQ Nation broke on Monday, and which the White House has been questioned about ever since. They have so far denied that such an order is the plan “at this time,” but advocacy groups remain on alert, especially after a draft copy of a drastic executive order that would give the religious right a license to discriminate against LGBTQ people and women was leaked, reportedly by White House staff.

Trump also spoke at length about “religious freedom” during his speech at the National Prayer Breakfast.

“We don’t know exactly what is coming,” said Michael Farmer of Equality Florida. “It’s all happening so fast, it’s hard to analyze the impact…We’re hoping Marco Rubio stands up for all Americans, particularly the marginalized and LGBT communities.”

Watch the press conference below.