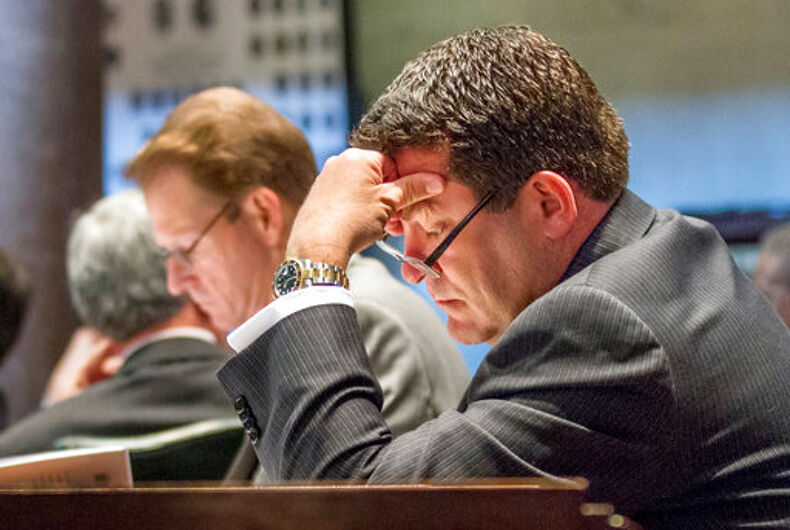 Sen. Green, a physician and Army veteran, introduced legislation, SB 127, a so-called “religious freedom” law that would hand companies a license to discriminate against LGBTQ people.

Green also co-sponsored a bill pushing for the ban of state-sponsored travel to states, like California, that have banned, or would ban, travel to Tennessee, after the state passed a law allowing counselors and mental health professionals to refuse to treat patients based on the patient’s religious or personal beliefs.

While speaking to the Chattanooga Tea Party in September, Green said he believes a transgender identity is a “disease,” and that he can be the “light” needed to stop the madness of acceptance and progress:

If you poll the psychiatrists, they’re going to tell you that transgender is a disease. It is a part of the DSM-6, I think it is, the book of diagnostic psychological procedures or diagnoses. It’s very interesting to see what’s happening in government, or in our nation.

But you ask about how we fix it ― how we get the toothpaste back in the tube. I gotta tell you ― it’s going to start with me being the salt and the light to the people around me. I mean, if you really want to bring this back to who’s at fault, we got to look a little bit inwardly. We’ve tolerated immorality. And we’re reflecting light.

In actuality, the DSM removed gender identity disorder as a diagnosis, replacing it with gender dysphoria, a condition the American Psychiatric Association describes as “a conflict between a person’s physical or assigned gender and the gender with which he/she/they identify.” It includes mention of the distress this can cause. That distress is exasperated by the type of bigotry displayed by Green.

Now an interview Green gave in June is receiving notice, in which he claimed there was a Biblical backing for his crusade:

The government exists to honor those people who live honorably, who do good things – to reward people who behave well and to crush evil. So that means as a state senator, my responsibility very clearly in Romans 13 is to create an environment where people who do right are rewarded and the people who do wrong are crushed. Evil is crushed.

He goes on to characterize the effort for transgender rights as a “war on women.”

You can listen to the interview below, with the comments on transgender rights coming around the 16 minute mark.

For the record, laws against peeping and sexual assault remain in place, and there is no evidence of transgender people being allowed to use the facilities matching their gender identity increasing the likelihood for attacks on girls and women.

“The Trump Administration must have been desperate to fill this post because Mark Green’s anti-LGBTQ remarks should disqualify anyone seeking to be in charge of the United States Army, which includes many out and proud soldiers,” said Sarah Kate Ellis, President and CEO of GLAAD. “Our nation is strongest when we are together – and calling transgender people ‘evil’ does just the opposite.”

Caitlyn Jenner’s way of protesting Trump: ‘I won’t be playing golf with him’