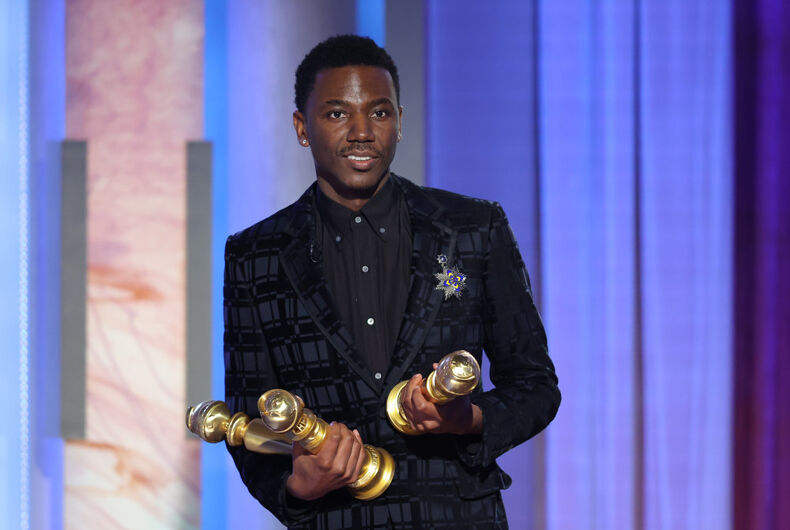 If there was any doubt that Hollywood would show up and play along at the 80th annual Golden Globe Awards last night—not least of all due to historic rain and flooding in Southern California—those doubts were largely laid to rest.

The ceremony returned to NBC after the network declined to air the show last year in the wake of an explosive Los Angeles Times exposé, which revealed that the Hollywood Foreign Press Association—an already famously dubious organization—had zero Black members and engaged in ethically questionable conduct. Since then, however, the HFPA has reportedly instituted major reforms and its voting pool is now 52% female and 51.5% racially and ethnically diverse. And as presenters were announced over the last few weeks, it became clear that the film and TV industry was willing to give the HFPA another shot.

Host Jerrod Charmichael opened the show with a monologue that cut straight to the point: “I’m here because I’m Black,” the out comedian said.

It was an appropriately awkward start to the evening, acknowledging the most noteworthy of the HFPA’s recent scandals. But from there, the mood lightened gradually, thanks to early wins for Key Huy Quan and Angela Bassett in the Best Supporting Actor in a Motion Picture categories. Both Quan and Bassett gave moving, emotional speeches that reminded us of why we watch awards shows in the first place.

As is typical of awards shows, the three-plus hour broadcast was a bit of a slog punctuated by some hilariously memorable moments.

Jennifer Coolidge was an absolute joy every time she took the stage, presenting as well as winning Best Performance by an Actress in Supporting Role, Limited Series, Anthology Series or a Motion Picture made for Television for her role in The White Lotus. (Charmichael also joked that he apologized to Coolidge as a gay man for what White Lotus’s “high class gays” did to her in the show’s second season.)

Regina Hall finding out why Kevin Costner couldn’t be at the #GoldenGlobes just won next year’s #GoldenGlobes for Best Actress in a TV Comedy pic.twitter.com/5WjI6zosdn

But it was Regina Hall who stole the show later in the night. Accepting the award for Best Performance by an Actor in a Television Series, Drama, on behalf of Kevin Costner, the Support the Girls star cracked up as she discovered in real-time that the Yellowstone star couldn’t make it to the ceremony because he was sheltering in place in Santa Barbara due to flooding.

MJ Rodriquez made history last year as the first trans actress to win a Golden Globe. that ceremony never happened, so tonight Ryan Murphy shouted her out during his own speech so she could get her own standing ovation. love, love, love pic.twitter.com/mJOuK3DY5w

As for the show’s queer highlights, Ryan Murphy devoted much of his Carol Burnett Award for Achievement in Television acceptance speech to acknowledging and uplifting his Black and LGBTQ+ collaborators. He asked the audience to give Michaela Jaé Rodriguez, who became the first transgender actor to win a Golden Globe last year, the standing ovation she hadn’t gotten due to the 2022 ceremony’s cancelation.

"I don't know if you're clapping because you like the dress, because I'm here, or because I'm gay now, but I'll take it." —Niecy Nash is perfection lol#GoldenGlobes pic.twitter.com/tjLayofgza

And while bisexual White Lotus creator Mike White was the only LGBTQ+ nominee to take home an award last night, the show was packed with queer presenters, including Rodriguez, Niecy Nash-Betts, Coleman Domingo, Harvey Guillén, and Billy Porter.

“The Banshees of Inisherin” (Searchlight Pictures)

Best Performance by an Actor in a Motion Picture, Drama

Best Performance by an Actress in a Motion Picture, Drama

Best Performance by an Actress in a Motion Picture, Musical or Comedy

Michelle Yeoh (“Everything Everywhere All at Once”)

Best Performance by an Actor in a Motion Picture, Musical or Comedy

Colin Farrell (“The Banshees of Inisherin”)

Ke Huy Quan (“Everything Everywhere All at Once”)

“House of the Dragon” (HBO)

Best Performance by an Actor in a Television Series, Drama

Best Performance by an Actress in a Television Series, Drama

Best Actress in a TV Series, Musical or Comedy

Best Actor in a TV Series, Musical or Comedy

Best Limited Series, Anthology Series or a Motion Picture made for Television

Best Performance by an Actor, Limited Series, Anthology Series or Motion Picture made for Television

Best Performance by an Actress, Limited Series, Anthology Series or a Motion Picture made for Television

Best Performance by an Actress in Supporting Role, Limited Series, Anthology Series or a Motion Picture made for Television

Best Performance by an Actor in Supporting Role, Limited Series, Anthology Series or a Motion Picture made for Television