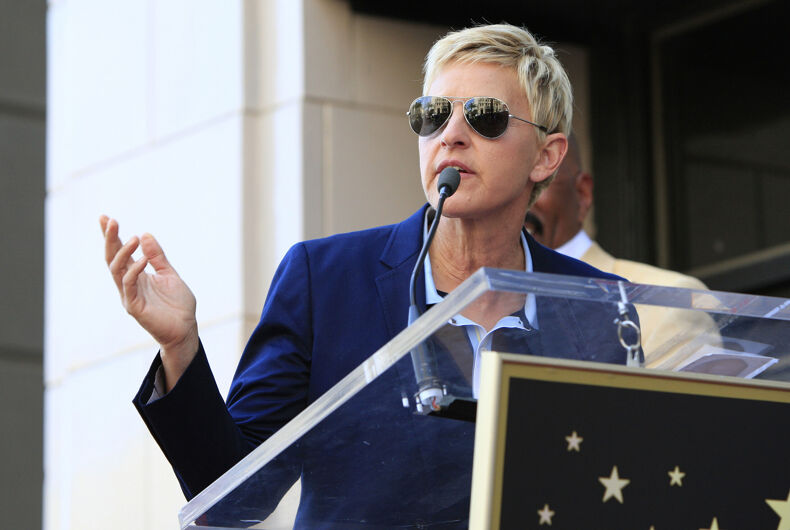 Ellen DeGeneres at a ceremony where Steve Harvey is honored with a star on the Hollywood Walk Of Fame on May 13, 2013 in Los Angeles, CaliforniaPhoto: Shutterstock

Model and actress Emily Ratajkowski called out Ellen DeGeneres after a TikToker posted a clip of a 2012 interview with Taylor Swift, in which DeGeneres would not stop pressuring a visibly upset Swift to share details about her dating life.

“This is so fucked up,” Ratajkowski commented on the post. “She’s literally begging her to stop.”

The TikToker posted the clip along with a more recent interview with Swift where she talks about how hard it was to be reduced to her dating life when she was younger.

“When I was like 23 and people were just like kind of reducing me to, kind of making slideshows of my dating life and putting people in there that I’d sat next to at a party once and deciding that my songwriting was like a trick rather than a skill and a craft. It’s a way to take a woman who is doing her job and succeeding at doing her job and making things and in a way it’s figuring out how to completely minimize that skill.”

“in this interview she’s 100% describing being on the Ellen show,” the TikToker wrote.

In the second clip, that of the Ellen interview, Swift becomes more and more upset after Ellen tells her she will be showing a slideshow of men to Swift and asks her to ring a bell for each one she has dated.

“I don’t know if I’m gonna do this,” Swift said, shocked at the request.

“Yeah you will,” Ellen responded.

“Ok, ring it on three different guys, we’ll narrow it down,” Ellen said, as Swift’s jaw dropped in shock.

From there, Ellen begins the slideshow of photos of Swift with different men, including Taylor Lautner, John Mayer, and Justin Bieber.

As the slideshow went on, Ellen took the bell from Swift and started ringing it. Finally, Swift broke down, yelling, “Stop it, stop it, stop!” She seemed near tears, but at the same time trying to laugh it off.

Many commenters agreed with Ratajkowski’s criticism of the interview.

“I think the sentence ‘I don’t wanna do it’ should’ve been more than enough,” one user wrote.

“She’s clearly visibly upset but having to like, ‘perform’ that she’s laughing it off because an audience of people is laughing at her…” said another.

Another noted, “The fact that the interview was like 10 years ago and she’s still talking about it means that so deeply hurt her.”

Diversity was on display at the 80th annual Golden Globes

Conservatives are losing their minds over “lesbian” female M&Ms marketing