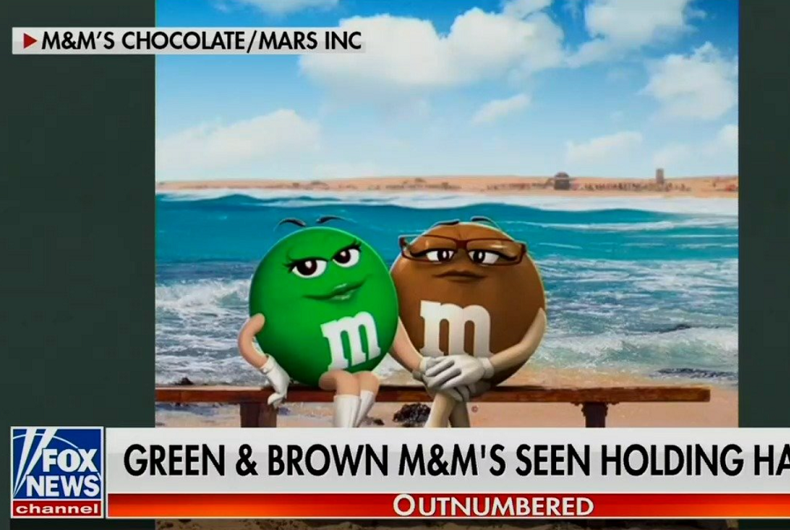 Conservatives in the media are attacking M&Ms candy after they announced the release of candy packages with only the female characters, Green, Brown, and the new Purple.

The limited edition packages show the three female characters upside down with the message “Supporting women flipping the status quo.” The packages will only contain green, brown, and purple M&Ms.

“This is the kind of thing that makes China say like, ‘Oh good, keep focusing on that, keep focusing on giving people their own color M&Ms, while we take over all of the mineral deposits in the entire world,'” said Fox co-host Martha MacCallum on Outnumbered, as she focused on the M&M packaging.

“China’s also pushing this through TikTok,” co-host Lisa Booth claimed, not explaining what she meant.

A chyron on the show also noted that Green and Brown held hands in an ad.

"China is pushing this through TikTok" pic.twitter.com/kCCSkC5tHf

Fox host Tucker Carlson – who famously flipped out last year when the Green M&M was redesigned to be less sexy – called the new packaging “woke” and said that the Green M&M “is now a lesbian maybe?”

“And there’s also a plus-sized, obese purple M&M,” he said, referring to the new Purple character who is supposed to be a peanut M&M.

woke obese lesbian M&Ms are coming for your kids pic.twitter.com/226zjlSiOJ

Daily Wire editor Ben Shapiro angrily asked, “Women, do you feel represented now because of the green, purple, and brown M&Ms? On the M&M package that you’re guzzling down lonely in your apartment with your wine and your cats? How’s that going for you?”

“Also, do not ask the female M&Ms for directions. It’s just not gonna go particularly well.”

Ben Shapiro throws a tantrum over M&M's marketing: "If it's an all-female M&M, I assume that it costs 77 cents on the dollar of what the regular M&M's would cost, right?" pic.twitter.com/TYcYjhvFuW

“Women all over the world are flipping how they define success and happiness while challenging the status quo, so we’re thrilled to be able to recognize and celebrate them,” said Mars Wrigley North America chief marketing officer Gabrielle Wesley, announcing the new packages. “And who better to help us on that mission than our own powerhouse spokescandies Green, Brown, and Purple?”

Last year, Carlson freaked out when M&Ms announced that Green and Brown would be wearing more sensible shoes, saying that the “less sexy” footwear made the candy “deeply unappealing and totally androgynous.”

Tucker: M&M’s will not be satisfied until every last cartoon character is deeply unappealing and totally androgynous. Until the moment you wouldn’t want to have a drink with any one of them. That’s the goal. When you’re totally turned off, we’ve achieved equity… pic.twitter.com/rz7VtVCHWu