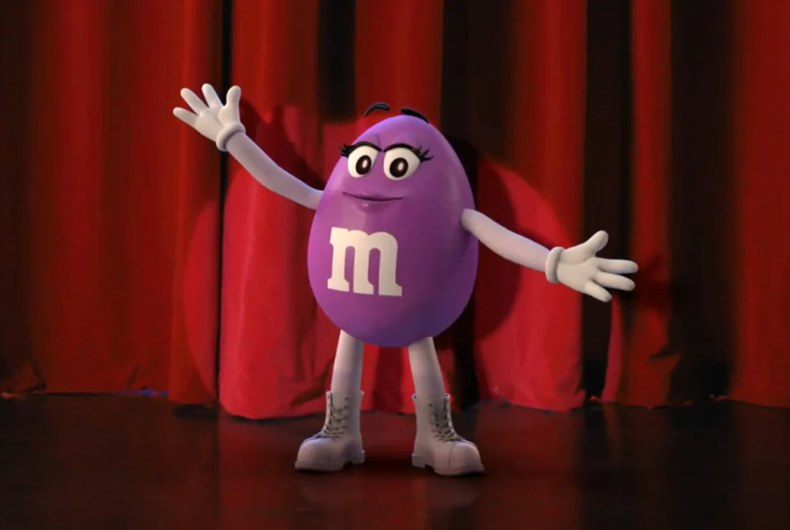 That’s what they’re singing about the new “purple-y peanut shaped chocolate candy” joining the six current characters in M&Ms’ line-up of “melts on your mouth, not in your hand” candy-coated chocolates.

And now conservatives are worried that the M&M is transgender.

The introduction was made in a new music video from candy behemoth Mars Wrigley that came out last week.

“Mars is thrilled to debut the newest member of the M&M’S cast of characters to the world. There is so much about our new spokescandy that people can relate to and appreciate, including her willingness to embrace her true self – our new character reminds us to celebrate what makes us unique,” said Jane Hwang of Mars Wrigley.

The latest “spokescandy,” Mars said, was “designed to represent acceptance and inclusivity.”

“Our newest member is known for her earnest self-expression,” the brand said in a press release. “Keen self-awareness, authenticity and confidence are the driving forces behind Purple’s charm and quirky nature.”

Which immediately made some on the right mad. Like on One America News (OAN), where the host did not take kindly to the purple symbol of inclusivity.

“I think it’s a female character,” the host said as the words “M&Ms candy falls victim to woke mob… again” showed on the screen. “But I’m pretty sure they haven’t said.”

On OAN, they are outraged M&Ms has “gone woke” with new purple M&Ms that signify “inclusiveness and acceptance.” pic.twitter.com/9clGHKRLok

The new lavender-hued candy’s pronouns are a chocolatey her/she. Her sexual orientation is left to the eater’s imagination. Her “purple-y” shade and the company’s “global commitment to creating a world where everyone feels they belong and society is inclusive” is a hint.

She drinks. In the video debut, Purple sprawls over a platter of wine and cheese declaring in song, “My perfect party would be finishing this puzzle of some brie and Chablis,” the background chorus asserting her assertiveness, “This is she being she!”

Purple joins Red and Yellow, introduced in 1954, Blue, Green and Orange from 1998, and Brown, debuting in 2012. “Peanut-shaped” Purple is the third female in the line-up, joining Brown and Green, and the very first female peanut.

M&Ms were created in 1941 and went into battle with US troops during World War II. They were reintroduced to candy lovers in 1996 as “characters” in a Super Bowl ad in an iconic campaign featuring Red, Yellow, Blue, and Green as sarcastic, simple, cool and sexy, respectively. The makeover from ad agency BBDO was a hit.

The song and music video, titled “I’m Just Gonna Be Me,” are part of M&M’s FUNd initiative, which will donate $1 for every stream to non-profit Sing For Hope, with a $500,000 ceiling.

Purple is open about her occasional discomfort in the spotlight. “You might say I’m awkward, and hey, I would agree,” she croons. “She’s pretty awkward,” the chorus chimes in. Purple reproves politely: “But let’s leave that line for me.” “Our bad,” mopes the refrain.

A character revamp in January this year switched out white-toned limbs for character-colored extremities, and gender-emphasizing accessories were swapped for more neutral alternatives. Tucker Carlson called the changes “deeply unappealing and totally androgynous.” The loss of Brown’s stiletto heels was a particular loss for the Fox host: “Less sexy.”

No word yet on Carlson’s reaction to Purple’s chunky lace-up boots.