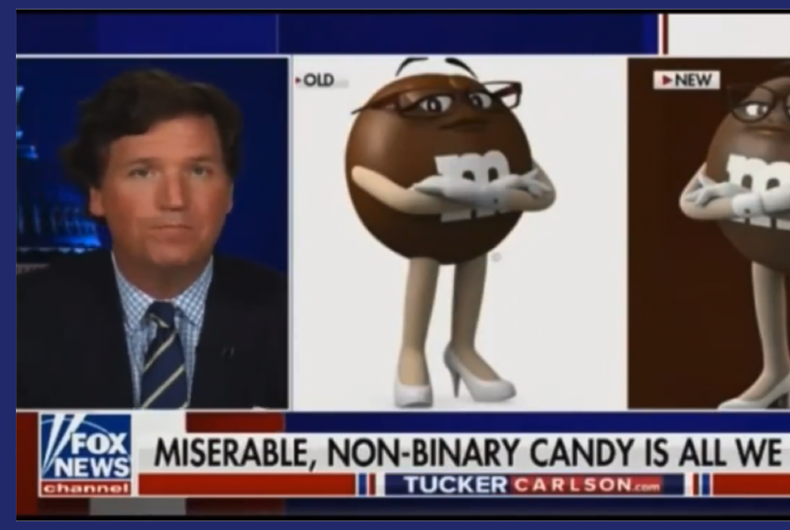 Tucker Carlson maligning the M&Ms as "Miserable, non-binary" while the Brown M&M is shown on screen.Photo: Screenshot/Twitter

Multiple personalities on FOX News, chief among them Tucker Carlson, spent their Friday shows attacking the M&Ms brand of candy for slightly redesigning some of their signature mascot characters to be more “inclusive.”

Unlike most of the lighthearted jokes people took the opportunity to make about the “changes,” Carlson once again took the opportunity to rely on his usual tendency to mock and vilify LGBTQ people. He derogatorily deemed the candies “miserable, non-binary ” that “we all deserve” and are “deeply unappealing and totally androgynous.”

Taking its candy commercials very seriously, Mars Inc. announced this week that its M&M characters that appear in ads will have “more nuanced personalities to underscore the importance of self-expression and power of community through storytelling.”

The green M&M, for example, will wear sneakers “to reflect her effortless confidence” and the brown M&M will wear sensible kitten heels instead of her previous high heels to show that she is sensible. The red M&M will be less bossy and the orange M&M will “acknowledge his anxiety.”

The company will also have the skin color on the characters’ arms and legs match their candy shells instead of the white-people flesh tone in their previous design.

On his show on Friday evening, Carlson — next to graphics of the Brown M&M’s before and after pictures, above chyrons such as “Miserable, Non-Binary Candy Is All We Deserve,” and “Candy In Sexy Shoes Is Highly Offensive.”

“Bet you didn’t think M&Ms were pushing intolerance, but they were,” Carlson quipped, “[So] they’ve been changed.”

As before-and-after pictures of the faux characters are put up, Carlson explains, “You’re seeing those changes on the screen. The green M&M, you will notice, is no longer wearing sexy boots. Now she’s wearing sensible sneakers. Why the change?

“Well according to M&Ms, ‘We all win when we see more women in leading roles.’ Because leading women do not wear sexy boots, leading women wear frumpy shoes. The frumpier the better. That’s the rule,” he quips.

“The other big change is that the brown M&M has ‘transitioned from high stilettos to lower block heels,’ also less sexy,” he continues, “That’s progress. M&Ms will not be satisfied until every last cartoon character is deeply unappealing and totally androgynous.

“Until the moment you wouldn’t want to have a drink with any one of them. That’s the goal. When you are totally turned off, we’ve achieved equity. They’ve won,” he said sarcastically.

Then, beginning to refer to the orange M&M, who Mars says will “acknowledge and embrace his anxiety,” Carlson says, “Maybe he doesn’t like all the ugly new shoes he sees around him. Maybe he liked the sexy boots. Maybe the orange M&M is a secret sexist himself.”

Tucker: M&M’s will not be satisfied until every last cartoon character is deeply unappealing and totally androgynous. Until the moment you wouldn’t want to have a drink with any one of them. That’s the goal. When you’re totally turned off, we’ve achieved equity… pic.twitter.com/rz7VtVCHWu

Tucker: If you look at him, the orange M&M does appear very anxious. Maybe he doesn’t like all the ugly new shoes he sees around him. Maybe he liked the sexy boots. pic.twitter.com/ePlcMXZJKW

The result of Carlson’s segment was a large amount of online users mocking him — instead of the candies — for getting so worked up about ‘less’ sexy animated characters. Others once again rolled their eyes at his and other conservatives’ continual obsessive rambling about queer people and gender diversity.

“You… wanted to have a drink… with an M&M? #DeeperIssues,” Rep. Eric Swalwell (D-CA) tweeted. He also retweeted a meme mocking Carlson’s apparent past attraction to the M&Ms’ sexiness.

Carlson wasn’t alone on the network’s airwaves in fixating on the candies’ supposed genders and identity changes. On Hannity, radio host Jimmy Failla made his debut on the show as a guest alongside upcoming weekend primetime host Lawrence Jones to talk about the chocolate crisis. The chyron for the segment read, “M&Ms Maker Mocked for Bizarre Rebranding Effort to Promote Inclusivity.”

Greg Gutfeld, the comedian who hosts FOX News’ late night talk show Gutfeld!, spoke about “the woke M&Ms” later that night, bemoaning that “When I eat a bag of M&MS, do I wonder which color and shape best represents my identity? No, because it’s [bleep]ing chocolate.”

“Will M&Ms still melt in your hand? They identify as trans,” Gutfeld claimed, going on to say, “If you really truly want to make an M&M feel like they belong, you probably shouldn’t be eating them. I mean, what kind of message does it send to children when you devour these non-binary bonbons?”

It also got further discussion on FOX & Friends Weekend the next morning by soon-to-be primetime host Jesse Watters and others, jokingly offering to rename other “offensive candies.”

Mars was asked for comment from Newsweek and Business Insider which was not immediately returned.

Someone get Tucker the sexy boots. I would pay real money to see Billy Porter deliver them in person. (Porter won the Tony for his role in Kinky Boots.) https://t.co/eJGl5DKasv

🤣Poor @TuckerCarlson…His @mmschocolate no longer turns him on w/o their sexy shoes! No more dates w/Tucky for you, chunky-heel-wearing candy cartoon. Seriously?

Cheers to all non-binary & androgynous people out there & the endless, wonderful people who see, love & respect us🥂 pic.twitter.com/OulQIvz9ma

And THAT harm, hurt, hate, disgust & inability to see the humanity in EVERY woman (both cis & trans) & non-binary, gender non-conforming, trans, androgynous person is exactly what @TuckerCarlson was intending to communicate…

.@TuckerCarlson sir I have an offer for you pic.twitter.com/UBeBePe5no

Wait until Tucker finds out that Skittles make a rainbow 🌈