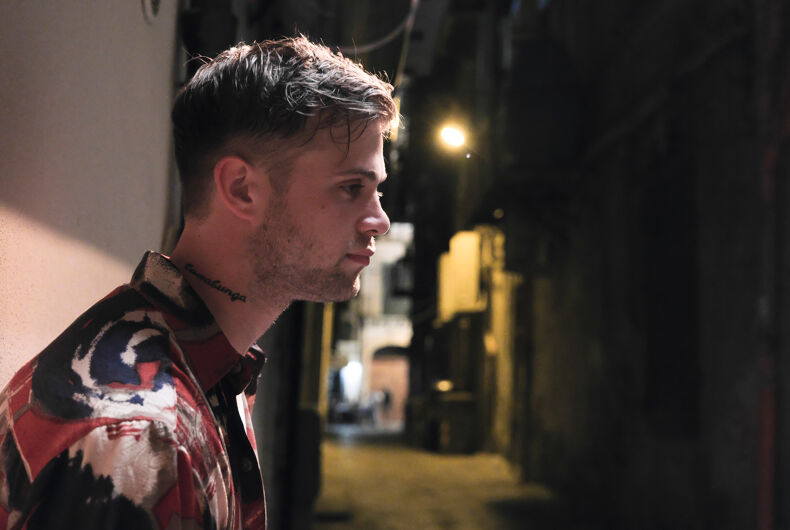 Leo Woodall as Jack in Season 2 of 'The White Lotus'Photo: Fabio Lovino/HBO

In addition being a surprise hit with both audiences and critics when it premiered last summer, the HBO anthology comedy made headlines in Season 1 for a notorious scene in which hotel manager Armand (Murray Bartlett) was caught performing anilingus on another hotel employee (Lukas Gage).

Season 2 of the show, which features an almost entirely new cast and moves the action from Hawaii to Sicily, has been even more sexually charged than the first. Gay Twitter has been thirsting over Theo James, Will Sharpe, and Adam DiMarco, all of whom have shown quite a bit of skin in recent episodes. So it seemed like only a matter of time before the show’s creator, writer, and director Mike White attempted to break the internet.

At the end of last night’s episode, Jennifer Coolidge’s Tanya stumbles upon her new gay bestie Quentin (Tom Hollander) in a very compromising position with his scorchingly hot alleged nephew Jack (Leo Woodall) in a scene that feel like a direct call back to the one between Bartlett and Gage in Season 1.

Unsurprisingly, The White Lotus is trending on Twitter today.

at its heart, the white lotus really is a show about privilege and different kinds of gay sex

In a season that deals explicitly with the transactional nature of sex, it seems likely that Jack is another sex worker, like Lucia (Simona Tabasco), who is just posing as Quentin’s nephew for the sake of discretion. But in an interview with Variety, White stayed tight-lipped. “Well, you’ll have to see,” the show’s bisexual creator told the magazine.

“There’s a pleasure to me as a guy who is gay-ish to make gay sex transgressive again,” White said of the scene. “It’s dirty… men are having sex and you have this Psycho music underneath. It just amuses me.”

“I just think transgressive sex is sexier. I guess I’m old school. There’s this Gothic vibe of walking through a haunted hotel or haunted house and people are having sex behind closed doors,” he added.

Hollander and Woodall both chimed in on their big scene as well.

“When I found out about the scene, I was speechless for a while,” said Woodall, who warned his dad not to let his six-year-old brother watch the episode. “I’m such a huge fan of Tom’s, and when I heard that he was going to be playing my uncle, I thought, ‘That is unreal.’ And then when I found out that I was going to shag him as well — that was kind of surreal. Anything that Mike White does with this show is kind of perfect, so there were no reservations about it. It felt like an incredibly ‘wow’ moment.”

Unlike Woodall, Hollander said he knew about the scene from the moment he was cast in the role.

“It’s more technical than anything else when you’re actually doing it,” Hollander said of filming the sex scene with intimacy coordinator Miriam Lucia. “You know, ‘Is this the right angle? Does this look right?’ But there was a mutually respectful energy between us, too. And on the set, the production was very tender around those moments. It certainly was around that one. We just wanted to do it right.”

“There is fantasy, and you’re going through your head going, ‘I hope I look good,’” Hollander continued. “But when they say action, in a way that goes, and you actually just find yourself thinking, ‘I want this to be a true representation of an intimate moment between two people.’ You just want to do it right.”