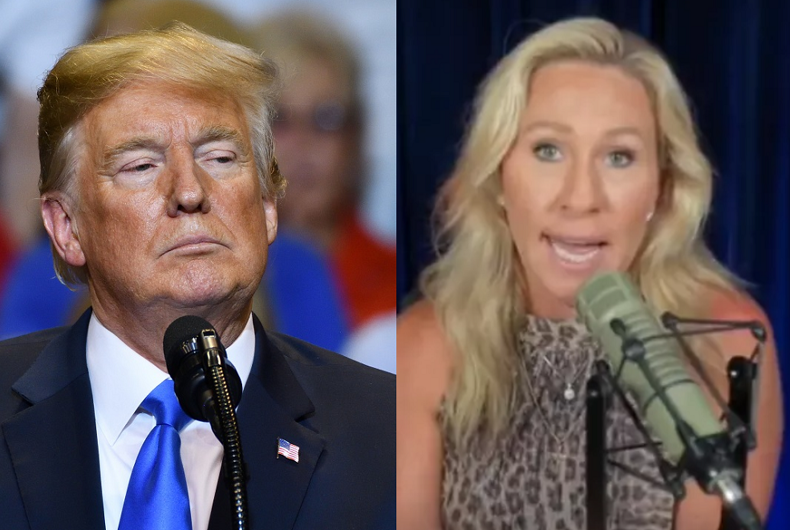 Donald Trump’s announcement that he was running for president again in 2024 was a low-energy flop. In a desperate attempt to grab the spotlight and hide from the special prosecutor, about all Trump could muster was the predictable litany of all the wrongs done to him.

Unsurprisingly, Trump’s lackluster performance didn’t generate much of a bump in enthusiasm for his candidacy. A Politico poll conducted after the announcement showed Trump at about the same level of support among Republicans as he had before. Sixty percent of party members think he should run, while more than one-third think he should not. Some 45 percent say that they would vote for him if the primary were held today.

While a lot of political coverage dwells on how Trump’s grip on the party is slipping, those numbers are still strong. If the field is divided among multiple candidates, Trump is in a great position to repeat his 2016 success.

But he still needs a little excitement to juice his campaign. The obvious way to do that is to start auditioning vice presidential candidates. Luckily for Trump, he has no shortage of prospects.

Amazingly, many of the top prospects are women, which would help Trump with his unvarnished sexism. Here are a few of the names already being floated.

Marjorie Taylor Greene. The MAGA idol and all-around hate monger is flexing her power these days, demanding a leadership role in the upcoming Congress. She’s also made it clear she would love to be Trump’s running mate.

“I would be honored,” Greene told The New York Times after confiding that she discussed the possibility with Trump himself.

Still, even Greene acknowledges that she would bring a lot of baggage to a ticket that resembles a luggage carousel. “I think the last person that the RNC [Republican National Committee] or the national party wants is me as his running mate,” Greene conceded.

Elise Stefanik. The Republican congresswoman had been a relative moderate until Trump entered the White House.  Then she went full MAGA in the apparent belief that was how she could further her career. Now the third-ranking Republican in Congress, Stefanik calls Democrats “pedo grifters.”

In terms of sucking up to Trump, she can’t be beat. The day after the election, Stefanik tweeted her endorsement of Trump’s re-election campaign before he even announced. Stefanik would be a candidate the party establishment could get behind and that Trump wouldn’t feel overly threatened by.

Nikki Haley. The former South Carolina governor and UN Ambassador has her eye on the Oval Office but has said she won’t run if Trump does. Haley is a savvy operator and was one of the few people to emerge from the Trump administration with her reputation not in tatters.

She’s already testing the waters by going all in on the culture war rhetoric, which is what you’d expect the VP candidate to be doing. In a Fox News appearance last August, Haley went on a transphobic rant, exactly the sort of thing guaranteed to please the GOP base.

Her biggest flaw: she criticized Trump after the January 6 insurrection.

Kristi Noem. The South Dakota governor emerged as a Trump favorite for defying COVID mandates during the height of the pandemic. She just won re-election by a landslide (not hard to do in deep red South Dakota). Her re-election campaign featured a series of anti-trans ads guaranteed to rile up the base and perhaps preview a national message.

Noem hasn’t been shy about making her presidential ambitions known. The question is whether she’s ready for the rigors of a national campaign.

Sarah Huckabee Sanders. She just won an election as governor of Arkansas, but she got there by serving as Trump’s take-no-prisoners spokesperson.

Sanders is someone Trump knows he can trust. She’s perfected the role of attack dog, which is exactly what you want in a vice president. She also knows her way around Washington, which helps her with the party establishment types. She also had a reputation for keeping Trump under control, which is no mean feat and something that the party would value in a number two.

Of course, you might wonder who would want to be on the ticket with Trump considering what happened to the last person who had the spot. Mike Pence not only gave up his integrity in the belief that it would make him a shoo-in as Trump’s successor, but he very nearly gave up his life for refusing to bow to Trump’s wishes before the mob he incited.

But in politics, ambitious people believe that they are always the exception to the rule. In Trump, they see a ladder to higher office. In reality, he’s usually the kiss of professional death.

Editor’s note: A previous version of this article said that over two-thirds of Republicans said they didn’t want Donald Trump to run for president in 2024. We regret the error.

Senate set to pass Respect for Marriage Act this afternoon