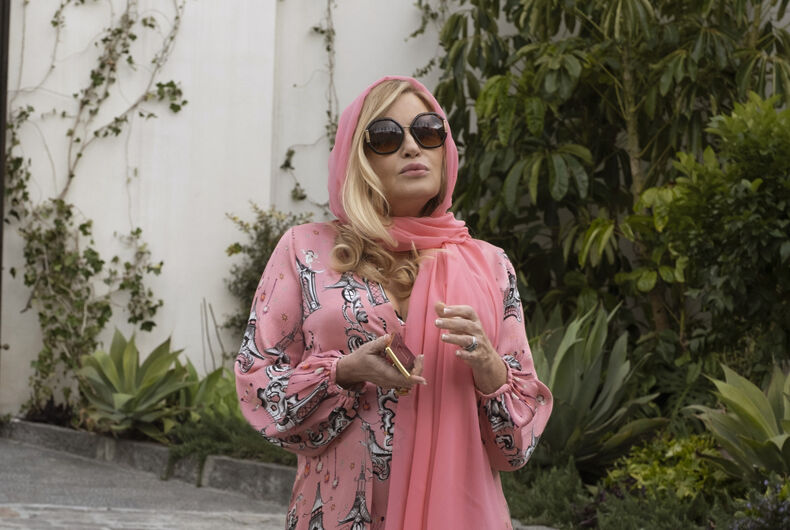 As if Jennifer Coolidge’s status as a gay icon were ever in doubt, Season 2 of The White Lotus made the prestigious designation ironclad.

The campier-than-thou comedic actress spent the latter part of the HBO dramedy’s recently wrapped season cavorting with “high-end gay,” giving rise to memes galore. Her instantly iconic season finale line – “These gays are trying to murder me” – in particular is burning up social media at the moment.

“These gays are trying to murder me”

THESE GAYS ARE TRYING TO MURDER ME pic.twitter.com/QT0OapD6La

THESE GAYS…. THEY ARE TRYING TO MURDER ME pic.twitter.com/BNBNkCBNAX

Cue literally everyone posting photos of their gay friend groups and renaming their group texts!

Unsurprisingly, Coolidge is thrilled. In a recent interview, the Emmy-winning actress was recently asked how she felt about being a gay icon.

“Oh, that’s so sweet. I don’t know, I guess I’m modest, but I’ll take that for sure,” she said. “It feels so good to get acknowledgment for my work.”

“Since I was young, I have had many gay friends early in my life, so my love for the community started at a very young age,” she continued. “And I’ve been in Hollywood a long time, so I’ve had the opportunity to work with so many queer actors. They give me credit, but I give it right back to them for always being there for me.”

Coolidge, who rose to fame as Stiffler’s Mom in the American Pie movies, played a queer dog owner in Best in Show, and stole the show from Reese Witherspoon in Legally Blonde, said she was never really conscious of her gay icon status.

“It was just the people I ended up being attracted to, we have a lot in common and we become best buds, and the movies I’ve been in helped too,” she explained. “There’s nothing more flattering than having the respect of gay men and women, so it’s a joy.”

She also joked that she holds no lingering resentment after the “high-end gays” of The White Lotus tried to bump her character off. “Oh, no not all,” she said. “It’s not your typical gay men story, but it was a genius idea. Tanya was just one of those people who is susceptible and got in with the wrong crowd, and they just happened to be gay.”

And for those anxiously awaiting the third season of bi creator Mike White’s series, which has already been renewed by HBO, she offered a tantalizing bit of speculation. “It gives Mike the chance to open the playing field to develop new gay storylines for season 3.”