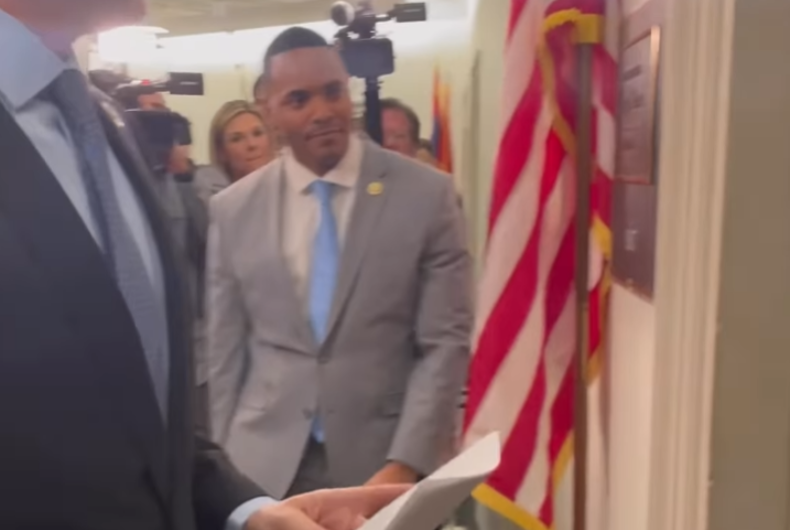 No one has been a bigger critic of out Rep. George Santos (R-NY) ever since he was caught lying about his entire life history than fellow New Yorker and fellow gay Congressman Ritchie Torres (D-NY). And yesterday, Torres – along with Rep. Daniel Goldman (D-NY) – hand-delivered the six-page ethics complaint they filed against him.

“George Santos MUST and will be held accountable,” Torres said on Twitter after delivering the complaint.

JUST NOW: We just hand-delivered a copy of the Ethics Complaint to George Santos, who has been put on notice. Not only for the lies he tells but also for the laws he has broken.

George Santos MUST and will be held accountable. pic.twitter.com/tsatCynHIj

In December, mere weeks after becoming the first out gay Republican elected to Congress, Santos’s life story came crumbling down. Multiple news reports said that there was no record of him attending the elite high school he said he attended or the colleges and universities he claimed to have degrees from. Citigroup and Goldman Sachs – the Wall Street banks he claimed to have worked for – had no record of his employment. Even his charity “Friends of Pets” was registered nowhere.

Santos admitted to adding “fluff” to his resume but denied criminal behavior.

A different ethics complaint was filed earlier this week asking the Federal Elections Commission to investigate how Santos – who declared an income of $55,000 in 2020 – was able to give a personal loan of $705,000 to his campaign in 2022.

Santos, on his financial disclosure form, said that his company Devolder Organization LLC earned over $1 million in 2021 and 2022, something that Torres’s and Goldman’s complaint said contradicts publicly available information, noting that the data company Dun & Bradstreet estimated that the company had revenue of $43,688 on July 20, 2022.

The complaint also points out that the law requires members of Congress to disclose a client if they personally performed services for the client and the client paid over $5000 in the previous two years. Santos said that his business’s sudden success came from “multi-million dollar agreements” but never disclosed the identities of those clients.

Furthermore, the complaint points out that Santos said he owned a property in Brazil valued at $500,000 to $1 million on his financial disclosure form. In the past, Santos claimed to own 13 different properties and later admitted to owning none.

“If Mr. Santos does not, in fact, own any property, then the representation of ownership over the Rio de Janeiro apartment is false and a clear violation of the Act,” the pair wrote in the complaint.

Torres and Goldman are “free to do whatever they want to do,” Santos told reporters yesterday. He said he’s not concerned about the complaint because “I have done nothing unethical.”

The complaint will go to the House Ethics Committee, which will have to decide if it will launch an investigation into the complaint. Disciplinary actions can be taken if wrongdoing is found. House Republicans, though, just voted to gut the bipartisan Ethics Committee, something Santos himself said was “fantastic.”

House Majority Leader Steve Scalise (R-LA) said that Republicans are going to “sit down and talk” with Santos.

Diversity was on display at the 80th annual Golden Globes