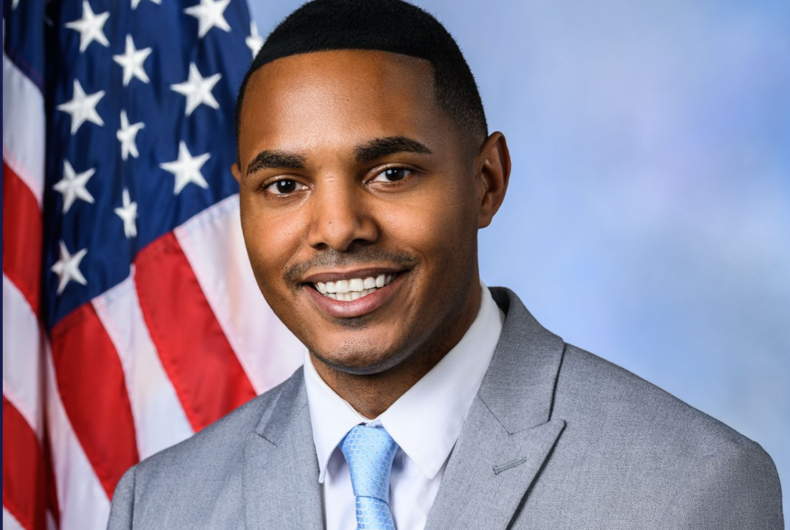 Out Rep. Ritchie Torres (D-NY) is the first openly gay Afro-Latino elected to Congress. He has spent his career fighting for public housing, poor people, and LGBTQ rights.

Torres served on the council until 2020. During his time there, he advocated for public housing recipients; against gig worker tip theft, predatory loans, cashless businesses, gang-related gun violence; and the city takeover of properties owned by people of color.

He became the first openly gay Afro-Latino elected to Congress in 2020 and began serving in the House in 2021.

Since early in his career, Torres has been out as a gay man and an advocate for LGBTQ rights. He defeated a city councilman who voted against marriage equality and made multiple anti-LGBTQ comments.

While serving on the city council, he helped open the first homeless shelter for LGBTQ youth in the Bronx and secured funds for LGBTQ senior centers in the city. He has also publicly spoken about the mental health struggles he faced due to homophobia.

On his congressional website, Torres wrote, “We must continue to combat LGBTQ+ discrimination with federal action. Millions of Americans still live in fear of losing their jobs, homes, or livelihoods because of who they are and whom they love.”

He has introduced legislation to ensure that LGBTQ applicants are fairly rewarded with small-business loans from financial institutions. He has introduced legislation to help train child protection agencies across the U.S. to better serve at-risk LGBTQ youth who are subject to abuse. He also introduced a bill to examine COVID-19 vaccination distribution among the LGBTQ community and a bill to ban so “conversion therapy,” the pseudoscientific form of mental torture that purports to change the sexual orientation and gender identities of LGBTQ people.

In June 2021, Torres introduced a resolution condemning violence against transgender and gender-nonconforming individuals. He also introduced a bill that would ban discrimination against gender identity and expression in public accommodations, employment, housing, and credit.

“Violence and discrimination towards the transgender and nonbinary communities should never be tolerated,” Torres wrote. “It is shameful to witness legislatures across the country propose policies that endanger the physical and emotional safety of LGBTQ+ individuals and block critical access to health care, housing, and employment.”

“It is time for Congress to unequivocally denounce the violence and introduction of anti-transgender legislation nationwide, honor the lives lost, and unreservedly commit to protecting the well-being and safety of transgender and nonbinary communities,” he added.

In response to Florida’s “Don’t Say Gay” law, Torres introduced a bill that would allow the director of the Smithsonian National Museum of American History to develop educational resources around LGBTQ and women’s history that are “accurate, relevant, and accessible.”

“Children in classrooms across the US should not be deprived of the opportunity to learn about the heroism displayed by many in the LGBTQ and women’s movements,” Torres said. “As Republican legislatures across the country attempt to silence the history and stories of LGBTQ families, we must act to proactively educate American youth.”

Ritchie Torres is an advocate for LGBTQ rights.

DNA evidence could help D.C. police solve the 1987 murder of a lesbian woman