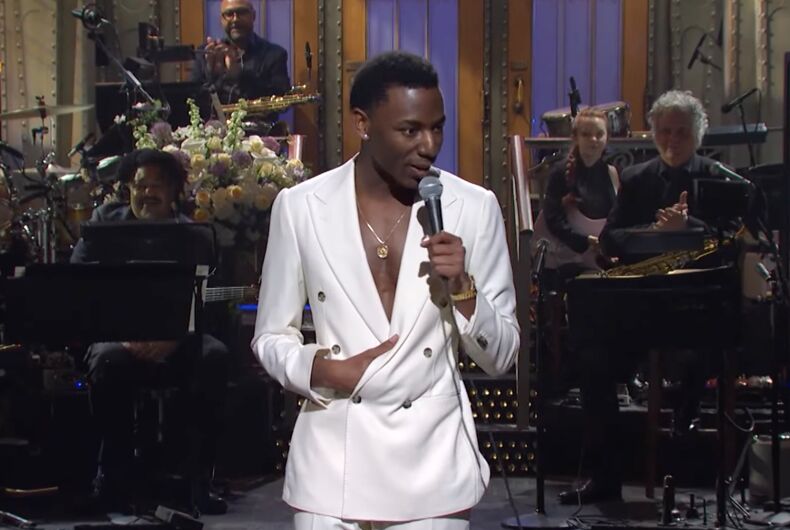 Out comedian Jerrod Carmichael is set to host the upcoming Golden Globe Awards in 2023.

This will be the first Golden Globes Awards in two years. Last year’s event was canceled after the HFPA was criticized for not having any Black members.

The ceremony will take place on January 10th in Los Angeles.

In a press release, Hollywood Foreign Press Association (HFPA) president Helen Hoehne said they are “so excited to have Jerrod Carmichael host the historic 80th Golden Globe Awards. His comedic talents have entertained and thrilled audiences while providing thought-provoking moments that are so important in the times we live. Jerrod is the special kind of talent this show calls for to kick off the awards season.”

The show’s executive producer Jesse Collins called Carmichael “a phenomenal talent with a fresh perspective and excellent comedic style” and said “we’re all thrilled to have him host this year’s show.”

Carmichael made waves this year for coming out to his live audience in his comedy special, Rothanial.

He told them how he resisted coming out for his entire life.

“At many points, I thought I’d rather die than confront the truth of that, to actually say it to people. Because I know it changes some people’s perceptions of me. I can’t control that.”

He also acknowledged that he feels “freer,” despite his coming out affecting his relationships with his religious mother.

When he hosted Saturday Night Live earlier this year, only a few days after the special was released, he spoke about the experience of coming out publicly.

The crowd cheered when he brought up coming out, to which he replied that excitement was a “nice and expected response” to someone being gay in New York.

“Honestly, if you’re gay in New York, you get to host Saturday Night Live – this is the gayest thing you could possibly do,” he joked. “I came out right onto the stage. We’re basically in an Andy Warhol fever dream right now.”

He also joked that being gay in New York means “you can ride the bus for free, and people just give you pizza.”

Over the summer, Carmichael also skewered Dave Chappelle over his refusal to apologize for repeated anti-trans jokes.

“Look, I get it. Everybody’s got to create a bogeyman to sell tickets. But it’s not true,” Carmichael told GQ. “Who’s getting canceled for what they’ve said? What does that mean, that people are mad on Twitter? Everybody’s fine. These grown men are fine. I think, a lot of times, people who offer nothing truthful or meaningful about themselves then complain about society at large and create this bogeyman.”

“It’s like, listen, that’s the most urgent thing in your life? God bless you. I’m tired of hearing it. Chappelle, do you know what comes up when you Google your name, bro? That’s the legacy? Your legacy is a bunch of opinions on trans shit? It’s an odd hill to die on.”

Man allegedly stabbed a transgender woman in the face