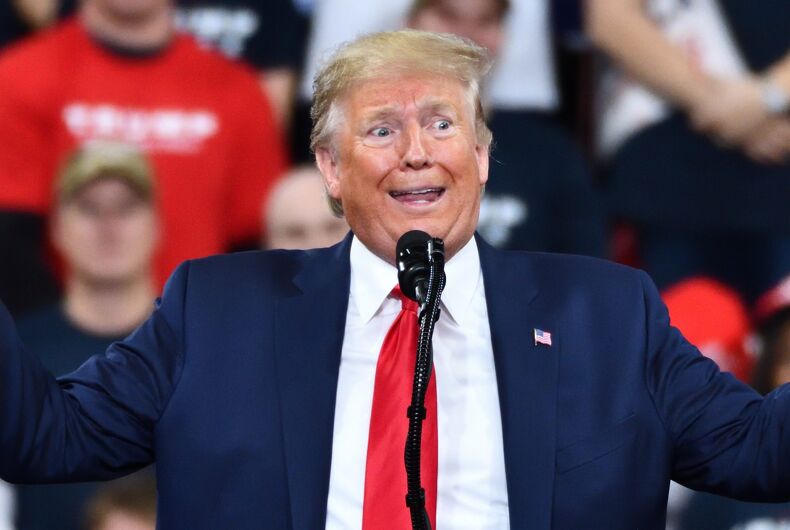 Twice-impeached former president Donald Trump has told LGBTQ+ Republicans that he and other conservatives will be “fighting hard” for them during his 2024 presidential campaign. Trump is widely considered the most anti-LGBTQ+ president of all time.

During Trump’s speech at the gala, he said, “We are fighting for the gay community, and we are fighting and fighting hard. With the help of many of the people here tonight in recent years, our movement has taken incredible strides, the strides you’ve made here, is incredible.”

However, during his presidency, Trump’s administration said the U.S. would no longer pressure foreign nations to repeal their anti-LGBTQ+ laws because imprisoning queers is a form of “religious freedom.” Trump’s Department of Justice told the Supreme Court that the U.S. government has no compelling interest in discouraging homophobia. Trump’s State Department repeatedly fought in court to keep same-sex binational couples and their kids out of the United States.

Trump slashed funding for HIV/AIDS research and, in some cases, stopped ongoing research on a cure altogether at the bidding of the religious right. He also fired the members of the President’s Advisory Council on HIV/AIDS (PACHA) and then re-staffed it entirely with older white men eight months before his presidency ended.

Trump has more recently referred to LGBTQ+ people as “sickos” who “support the perverted sexualization of minor children,” a line oft-repeated by anti-queer activists who inspire violent attacks on LGBTQ people, allies, and gender-affirming medical professionals.

During his speech at the gala, Log Cabin Republicans president Charles Moran said, “I just heard a Republican candidate for president stand up and say he is willing to fight and I challenge every other Republican to make the same pledge Donald Trump made tonight.”

Moran told the publication that he supports the “Restore Honor to Servicemembers Act,” legislation that would undo the dishonorable discharges of LGBTQ+ military servicemembers dismissed under “Don’t Ask, Don’t Tell.”

In 2019, Jerri Ann Henry, the first woman to lead the LCR, resigned after the group endorsed Trump’s 2020 reelection campaign.