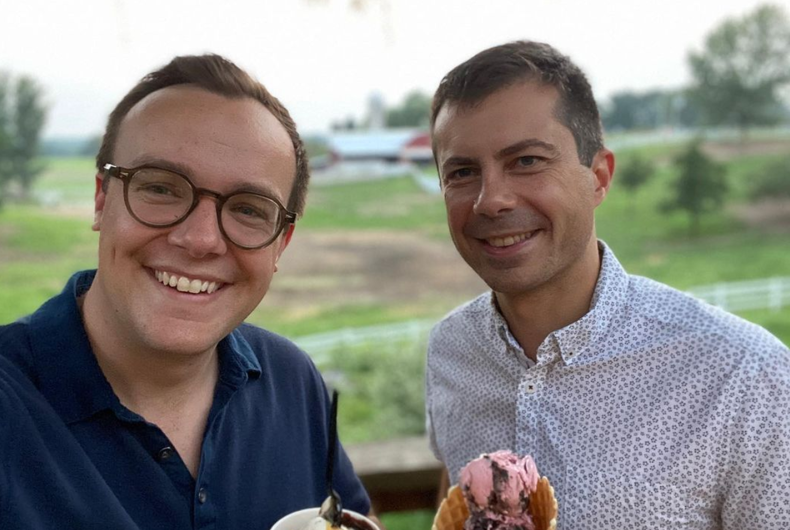 The group supports the bill that would forbid teachers from discussing sexual orientation or gender identity in primary school classrooms or “in a manner that is not age-appropriate or developmentally appropriate for students.”

Buttigieg – a gay man, a former school teacher, and father – has been outspoken about the dangers of the proposed legislation. The couple recently adopted twins.

“You’re essentially pushing kids back into the closet,” Buttigieg said during an appearance on CNN. “You’re saying we can’t even talk about your families.”

He also cited a Trevor Project study of suicidal ideation among LGBTQ high school students to show that the move would have a lasting and dangerous impact on queer youth. The law would prohibit discussions of different family structures and reading children’s books with a mention of LGBTQ parents or neighbors or relatives.

But LCR quickly jumped to defend the Republican attempts to smear LGBTQ people as dangerous… using stereotypical anti-LGBTQ smears to do it. Instead of defending LGBTQ kids and parents, they slyly accused them of child abuse.

“Contrary to Chasten Buttigieg’s LGBT fear-mongering and attempt for attention on CNN, Florida’s ‘Parental Rights in Education’ bill will not silence gay people. It certainly will not kill them,” President Charles Moran stated. “All it does is reinforce the commonsense belief that teacher-led classroom discussions around sexual and gender identity do not belong in primary schools.”

“With a projected Democrat slaughter ahead in the 2022 midterm elections–and hardcore progressives seeing their wet dreams of gender fluid, indoctrinated, and groomed children slipping from their grasp–activists are fighting back against parental rights bills by using outrageous scare tactics and other propaganda,” the group wrote on their blog. “Chasten is no exception.”

“The bill is in reaction to a year of remote learning where parents have become horrified witnessing the level of leftwing indoctrination their children are subjected to in public schools. Nationwide, parents are clamoring to gain some say in their child’s education. This new Florida bill is one step in that direction, attempting to squash the radical gender ideology forced upon elementary school children–an age group that do not yet have the capacity to understand complex sexuality and gender issues.”

“Why use scare tactics and propaganda to oppose an innocent piece of legislation like this?” the group continued before continuing the age-old stereotype of LGBTQ people as sexual predators. “The only people rallied by this propaganda are the radical alphabet folx who are already staunchly on the progressives’ side.”

“Furthermore, there is no conceivable reason that progressives should want elementary school children to know about sex, sexuality, and radical gender ideology beyond the truly disturbing and amoral.”

This will kill kids, @RonDeSantisFL. You are purposefully making your state a harder place for LGBTQ kids to survive in. In a national survey (@TrevorProject), 42% of LGBTQ youth seriously considered attempting suicide last year. Now they can't talk to their teachers? https://t.co/VtfFLPlsn3

JUST NOW: ""What kind of state are you building where you're essentially pushing kids back into the closet and saying we can't talk about you? … [Kids] take that trauma to heart."@Chasten on what is being called the "Don't Say Gay" bill in FL.pic.twitter.com/M1Qiz9Zt9f

Why this Black trans activist owes everything to his “praying granny”