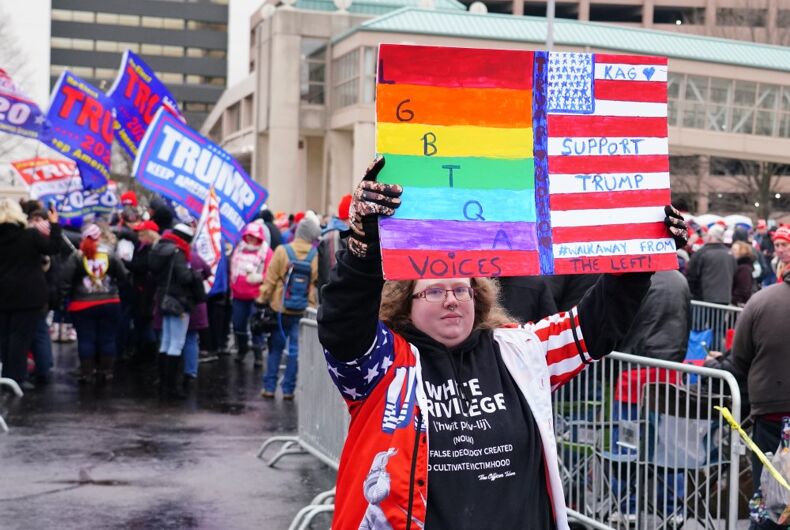 Lesbian Trump supporter at a June 14, 2020 protest in MilwaukeePhoto: Shutterstock

The Log Cabin Republicans – an organization that says it’s for “LGBT Republicans and straight allies who support equality under the law” – are now opposed to the Equality Act, which would ban discrimination against LGBTQ people in employment, public accommodations, housing, and other areas.

Related: Log Cabin Republicans endorsed some of the most anti-LGBTQ politicians running for office, including Donald Trump

On their “OutSpoken” webpage, LCR lists reasons to oppose the Equality Act, which are mostly common rightwing talking points about the bill.

Many of the talking points target transgender people. For example, the site says that the Equality Act “criminalizes medical expertise in favor of radical ‘gender theory,'” which is bizarre because Sen. Rand Paul (R-KY) was just shouting in the Senate yesterday about how the government should ban doctors from providing gender-affirming health care – including puberty blockers – to trans people.

But according to LCR, the Equality Act would force doctors to perform top surgery “on the teenage girl identifying as a boy.”

LCR also claims that the Equality Act “endangers children and will lead to increased suicidality” because transgender youth have a higher suicide rate than the general population, and the Equality Act puts “gender-confused children at extreme risk” by forcing them to transition. The webpage cites the anti-LGBTQ Heritage Foundation in this section and even parrots their false claim that 95% of transgender teenagers will grow up to be cisgender adults if they are not allowed access to gender-affirming medical care.

Effectively, LCR is arguing that being transgender is just a phase despite all scientific and medical evidence otherwise.

LCR borrows from TERF rhetoric and says that the Equality Act “eliminates women’s spaces,” even though it does no such thing. LCR quotes the rightwing website The Federalist in referring to transgender girls and women as a “man or boy claiming a female gender identity” and implies that they are a threat to cisgender girls and women.

While most of LCR’s disdain is for transgender people, they also attack the Equality Act by saying it violates religious freedom, quoting anti-LGBTQ activist Ryan Anderson: “Pope Francis would be treated as the legal equivalent of a Jim Crow segregationist.”

The website also argues that the Equality Act would violate state and local governments’ rights, an old argument often trotted out against civil rights legislation under the premise that people who live in conservative states don’t deserve to be protected by the law.

The Equality Act’s findings actually state that discrimination against pregnant women includes “sexual harassment, differential pricing for substantially similar products and services, and denial of services because they are pregnant or breastfeeding” and bans discrimination in public accommodations – including establishments that provide health care – for all the categories currently covered in federal civil rights legislation as well as sexual orientation and gender identity.

LCR’s website does not name any examples of states that had adopted similar anti-discrimination legislation that managed to force doctors to perform abortions.

Ultimately, though, LCR’s argument is about pitting gay and bisexual people against transgender people. In fact, it’s their last subheading: “The Equality Act enshrines transgender ideology over LGB identity.”

LCR quotes gay Republican John Paul Moran here: “If being gay means being a man who has same-sex attraction to another man, the Equality Act would make this definition completely defunct. What is now a ‘man’? Whoever claims to be.”

Contrary to Moran’s claim, in states that have passed legislation similar to the Equality Act, gay men have continued to exist.

“As part of the Democrats’ hard shift to the left, they continue to trample on the rights and freedoms of all Americans in the name of equality,” Charles T. Moran, managing director of LCR, said in a statement.

“Let me be clear – Log Cabin Republicans is not now, nor will it ever retreat on our commitment for equality for the LGBT community – the transgender community included.”

The House passed the Equality Act yesterday and it is headed to the Senate.