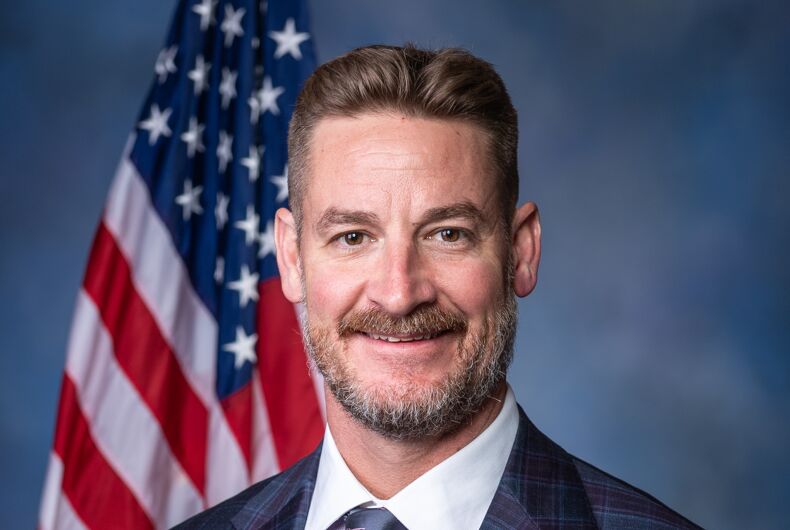 A GOP lawmaker is drawing condemnation for saying in a House speech that God “detests” LGBTQ people.

Rep. Greg Steube (R-FL) spoke during the floor debate on the Equality Act yesterday, quoted the Bible, and said that a “rejection of God’s design” of “complementary” sexes “offends God.”

Steube read from the Deuteronomy: “A woman must not wear men’s clothing nor a man wear women’s clothing, for the Lord your God detests anyone who does this.”

“Now, this verse isn’t concerned about clothing styles, but with people determining their own sexual identities,” he said. “It’s not clothing or personal style that offends God, but rather the use of one’s appearance to act out or take on a sexual identity different from the one biologically assigned by God at birth.”

“In his wisdom, God intentionally made each individual uniquely either male or female. When men or women claim to be able to choose their own sexual identity, they are making a statement that God did not know what he was doing when he created them.”

While his words may appear to be specifically directed at transgender people, he goes on to explain that “gender confusion” applies to anyone who doesn’t see men and women as “complementary toward one another,” implying that he’s not making a distinction between gender and sexuality.

He said that God made men and women “to be distinct from and complementary toward one another. The gender confusion that exists in our culture today is a clear rejection of God’s good design. Whenever a nation’s laws no longer reflect the standards of God, that nation is in rebellion against him and will inevitably bear the consequences.”

“What any religious tradition describes as God’s will is no concern of this Congress,” said Rep. Jerry Nadler (D-NY).

Rep. Katherine Clark (D-MA) called out members of Congress who “describe transgender people as something less-than, as underserving, and illegitimate.”

In early 2020 and again in 2021, Steube introduced a bill in the House that would ban transgender girls and women from playing school sports, making him a leader of sorts on anti-LGBTQ legislation in Congress.

What kind of Big Bear person are you? Let’s get on the road & find out.