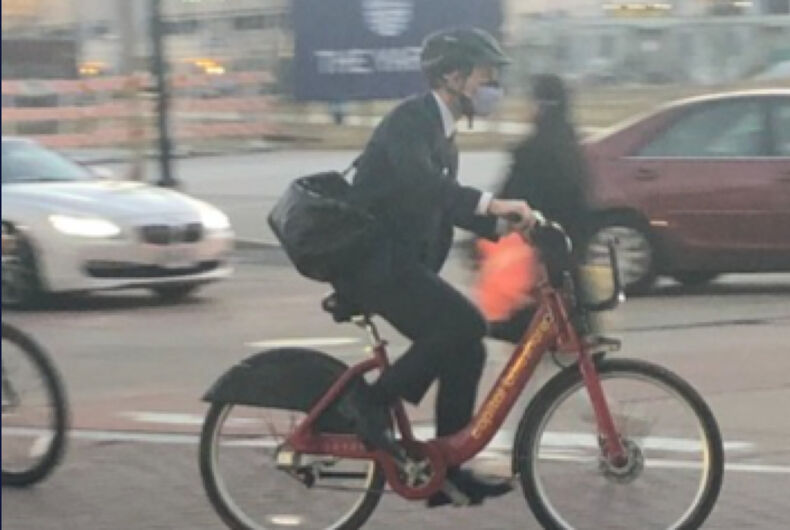 Pete Buttigieg cycling through the streets of Washington D.C.Photo: Screenshot/Twitter

People in Washington D.C. are used to seeing political figures and government employees around the nation’s capital, and it seems that the new Secretary of Transportation isn’t going to be an exception to that.

City sleuths noticed yesterday that Secretary Pete Buttigieg has used the city’s Capitol Bike Share program to bike to and from work. They might have gotten him in the doghouse, too.

Politico‘s Michael Stratford shared footage from some of the people that Buttigieg flew by.

The Capital Bikeshare, commonly known as CaBi, operates over 5,000 bicycles available for public use around the metro D.C. area.

The Department of Transportation is in D.C.’s Navy Yard section is only a few minutes from the Capitol.

Cabinet secretaries ⁦@bikeshare⁩ home from work, too. A person who appears to be ⁦@SecretaryPete⁩ rolling through Navy Yard just now: pic.twitter.com/CmMS9psCQu

Commenters online noted how seeing the sitting Pete actively use one of the programs he’s tasked with overseeing could be a “hopeful sign” for some. Others were surprised to see a sitting official in the Presidential line of succession out in the open.

People added that if Buttigieg is going to regularly cycle to and fro, he should carry a more ergonomic bag as to not hurt himself.

One noteworthy commenter noted that it looks like he had room on his bike to stop by the grocery store on his way home: his husband Chasten.

👀 sure looks like there’s room for groceries in that basket https://t.co/1092hb8oB7