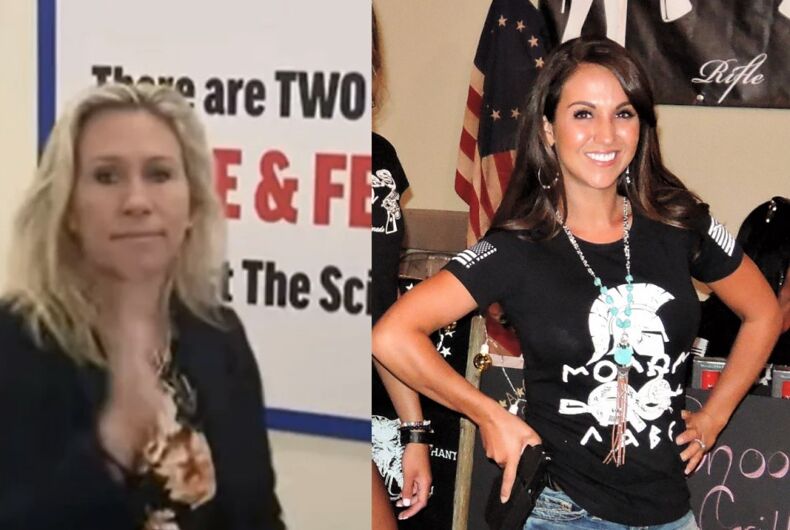 The feud started over a comment Boebert made while speaking to Turning Point USA co-founder Charlie Kirk — a man who has attacked transgender people and described opposition to religious exemptions as “fascism” — at his organization’s AmericaFest event.

Kirk asked Boebert about Greene’s endorsement of House Minority Leader Kevin McCarthy (R-CA) for his bid to become the House Speaker in January. Boebert is one of six Republican lawmakers who has opposed McCarthy’s speakership unless he agrees to a list of demands, including reinstating a rule allowing any Republican House member to call for his ouster.

Her comment about Jewish space lasers refers to Greene’s now-deleted November 2018 Facebook post in which she claimed that the 2018 California wildfires were possibly caused by “lasers or blue beams of light” from “space solar generators” that “collect the suns energy and then beam it back to Earth.” The wildfires would benefit Rothschild Incorporated, an international investment banking firm that bears the name of a wealthy Jewish family, she said.

After the left-leaning media watchdog Media Matters for America reported on Greene’s Facebook post, Jewish groups blasted Greene for pushing a conspiracy theory about Jewish people harming others for financial benefit. Such tropes have been used throughout history to justify violence and discrimination against Jewish people. Several conspiracy theories directly target the Rothschild family, with the first conspiracy theory dating back as far as 1846.

“She gladly takes our $$$ but when she’s been asked: Lauren refuses to endorse President Trump, she refuses to support Kevin McCarthy, and she childishly threw me under the bus for a cheap sound bite,” Greene continued.

“The country is facing extremely difficult times,” Greene concluded. “Americans expect conservative fighters like us to work together to Save America and that is the only mission I’m 100% devoted to, not high school drama and media sound bites. Save America! Defeat the Democrats!”

So far, Boebert hasn’t responded to Greene’s public rebuke. The two women are often mentioned together as two of the most far-right Republican members of the House. They’re both members of the Trump-worshipping America First Caucus, are both transphobic, and have both featured guns in their political advertisements. They both heckled President Joe Biden (D) during his March 2022 State of the Union address.

However, despite their close association, Boebert reportedly detests being associated with Greene. Boebert allegedly got into a tense argument with Greene in February after Greene attended a conference organized by white supremacist Nick Fuentes. Another lawmaker reportedly had to break up their fight before it came to blows.

In Greene’s past social media activity, she advocated for violence against House Speaker Nancy Pelosi and former President Barack Obama, said that an airplane never hit the Pentagon during the September 11 terrorist attacks, accused former Secretary of State Hillary Clinton of slicing off a child’s face and wearing it and other conspiracy theories.

Her support for these conspiracies led House Democrats and 11 Republicans to vote for her removal from the House Committee on Education and Labor and the House Budget Committee near the start of February.