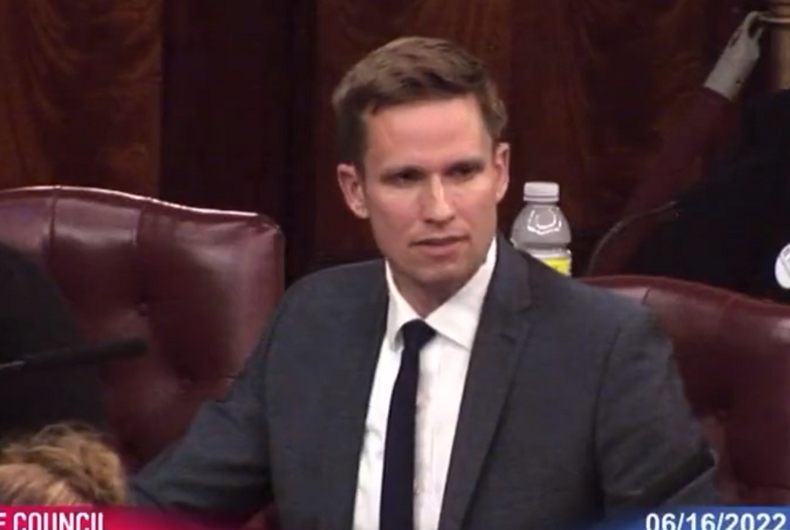 Two women have been arrested after they invaded New York City Council member Erik Bottcher’s apartment to complain about drag queens reading books. The council member had attended an event at a public library geared toward autistic children.

The children were left terrified by Gays Against Groomers; the group comprises far-right LGBTQ activists who have allied with the religious right. Most are Republican Trump supporters.

The group targeted Bottcher’s office first, scrawling vulgar slurs on the hallway outside the office. They did the same outside of his home.

The Drag Story Hour event was held at Manhattan’s Andrew Heiskell Braille and Talking Book Library. As Bottcher walked in the door, he tried to engage the protestors, but was met with jeers and shouts instead. He posted video of the confrontation on Twitter, drawing the group’s ire.

Today I witnessed pure hatred and bigotry outside Drag Queen Story Hour at a public library in Chelsea.

Inside, I witnessed a loving and peaceful reading of children’s books to kids.

“Grooming” is a set of manipulative behaviors sexual predators use to gain access to potential victims, to coerce them to agree to the abuse, and to reduce the risk of getting caught, according to the Rape, Abuse & Incest National Network. The process usually involves training the victims to keep secrets from adults they trust and desensitizing them to sexual discussions and touching. The goal is the sexual abuse of children.

Accusing LGBTQ+ people of “grooming” is a longstanding tactic of the religious right and has been proven false. Most children are groomed by either family members or church pastors.

But events featuring drag queens have become flashpoints nationwide. Armed militias and hate groups have threatened violence repeatedly and LibsOfTikTok, a Twitter account run by a far-right activist, has falsely accused multiple people of abusing children. Some have been forced to flee their homes. Hospitals and libraries have been forced to close due to bomb threats centered around supposed “grooming.”

“I want to show you the face of hate, right here in Chelsea,” Bottcher said in a video shared on Twitter before including video of counter-protestors. And he wasn’t cowed by the attempt to invade his apartment building.

“Erik Boccher [sic] is a pedo child groomer,” one of the women wrote on the sidewalk outside his home, along with threatening messages like “We want Erik.”

The building superintendent called the police after the women broke into the lobby. The women were arrested.

“This is pure hate, unmasked,” Bottcher said in a tweet. “If they think this is going to intimidate us, they’re mistaken. Our resolve is strengthened.”