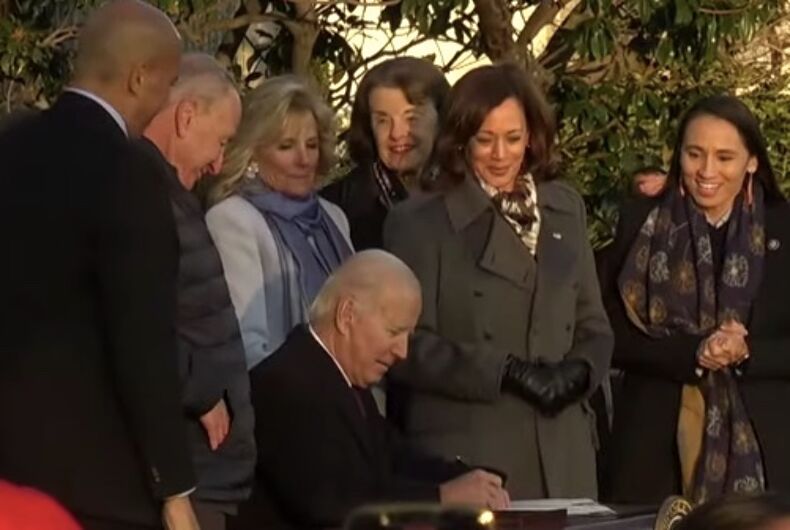 President Joe Biden officially enshrined marriage equality into federal law when he signed the Respect for Marriage Act (RMA) in a ceremony held on the White House lawn.

“This [bill] involved a simple proposition: Who do you love? And will you be loyal with that person you love? It’s not more complicated than that,” Biden said. “The law recognizes that everyone should have the right to answer those questions for themselves without government interference.”

Mentioning the Club Q shooting, Biden mentioned transphobic legislation, stating, “We need to challenge the hundreds of callous cynical laws introduced in the states targeting transgender children, vilifying families, and criminalizing doctors who give children the care they need. We have to protect these children so they know they’re loved, and we will stand up for them until they can speak for themselves.”

“Racism, antisemitism, homophobia, transphobia, they’re all connected,” Biden said. “The antidote to hate is love. This law and beloved defense strike a blow against hate in all its forms. And that’s why this law matters to every single American, no matter who you are or who you love.”

“This shouldn’t be about conservative or liberal, red or blue. No, this is about realizing the promise of the Declaration of Independence, a promise rooted in sacred and secular beliefs, a promise that we’re all created equal. We’re all entitled to what Abraham Lincoln called ‘an open field and a fair chance.'”

Before Biden signed the bill into law, he mentioned the groundbreaking marriage of Mildred Delores Loving and Richard Perry Loving which helped legalize marriages between people of different races. He also recognized Edie Windsor and Thea Spyer, a lesbian couple whose union helped overturn the federal government’s refusal to recognize legally married same-sex couples, as well as other couples who faced harassment and violence while fighting for their dignity.

“Continue to protect fundamental rights,” she told the crowd. “Let us continue to stand together because that is the beauty of the coalition assembled here today who fight for equality as activists and allies and parents and neighbors and young leaders.”

Senate Majority Leader Chuck Schumer (D-NY) told the crowd that he wore the same tie that he wore to his daughter’s wedding to her wife. “One of the happiest days of my life,” Schumer said of the wedding, adding that his daughter and her spouse are now expecting a child.

“By enacting this law we are sending a message to LGBTQ Americans everywhere,” Schumer said. “You too deserve dignity. You too deserve equality — that’s about as an American ideal as they come.”

House Majority Leader Nancy Pelosi (D-CA) offered a salute to those who helped pressure lawmakers into passing the landmark bill.

“Know your power. Take satisfaction,” Pelosi said. “None of this would have happened without your mobilization, your advocacy, which not only expanded freedom for the LGBTQ community but for all Americans. Keep your patriotism! To each and every one of you, give yourself a pat on the back.”

“But our work isn’t done. Our work isn’t done and won’t rest until the Equality Act is passed into law,” she said, referencing a House-passed bill that would enshrine sexual orientation and gender identity into federal civil rights legislation.

Arizona state Rep. Daniel Hernandez (D), said, “As a founder and the first chair of the Arizona Legislative LGBTQ Caucus, I’m honored to join with advocates for LGBTQ Equality in DC today for the historic signing of the Respect for Marriage Act. This is the culmination of many years of work to protect the rights of many in our community. We are thankful to both senators from Arizona for their work to pass this important and historic piece of legislation.”

The House of Representatives passed the RMA last week for the second time. The bill would require the federal and state governments to recognize same-sex and interracial marriages performed by other states.

The bill originally passed the House in July and was then passed by the Senate on November 29. The Senate amended the bill to add some religious protections and to state that it doesn’t legalize polygamy, so the House had to pass it again with the amendment.

The law is necessary now that the Supreme Court overturned Roe v. Wade, which shared part of its legal framework with Obergefell v. Hodges, the decision that legalized marriage equality in all 50 states in 2015. Justice Clarence Thomas said that the Court should “reconsider” Obergefell in his concurring opinion in Dobbs v. Jackson Women’s Health Organization, the case that overturned Roe this past summer.

The RMA “is a bipartisan triumph and a testament that love will always win in the end,” said out Rep. David Cicilline (D-RI) after the bill was passed. “Thanks to our actions today, married people who are building their lives together now know that the government will continue to respect and recognize their marriages.

“After the uncertainty caused by the Supreme Court’s Dobbs decision, Congress has restored a measure of security to millions of marriages and families. They have also provided hope and dignity to millions of young people across this country who can grow up knowing that their government will recognize and respect the families they build,” Biden said shortly after the bill passed the House last week.

“On this day, Jill and I are thinking of the courageous couples and fiercely committed advocates who have fought for decades to secure nationwide marriage equality at the Supreme Court and in Congress,” Biden added. “While we are one step closer on our long journey to build a more perfect union, we must never stop fighting for full equality for LGBTQI+ Americans and all Americans.”