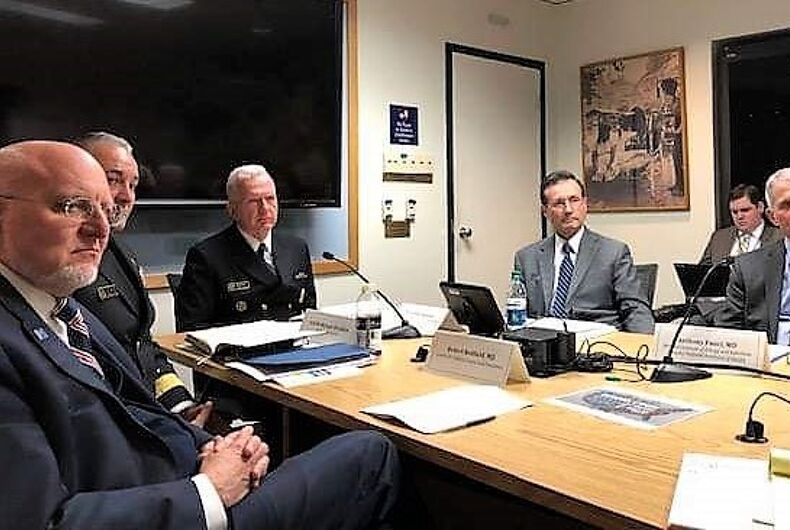 Today is National Black HIV/AIDS Awareness Day, so let’s hear it for the Trump USA team behind his master race plan to end the HIV epidemic by 2030. I’ve even included an actual photo of their meeting on January 6th with a diverse group of stakeholders.

Oh, wait. Scratch that. I’m sure the people of color are in the room somewhere. Pouring coffee, perhaps?

“Meeting today at HHS with the principal architects of the Administration’s plan to end HIV,” says the Facebook post with the photo from Carl Schmid, the hapless new co-chair of the President’s Advisory Council on HIV/AIDS (PACHA).

You remember PACHA. The council that lost a bunch of its members when they resigned in protest right before Trump fired the rest of them in a huff. And then HHS Secretary Alex Azar pretended none of that happened when he recently announced PACHA would be meeting in March under the new leadership of Schmid and his co-chair John Weisman.

Except March is coming and no other council members have been announced, while Schmid and Weisman are presumably going door to door trying to find someone, anyone, who will make the same mistake they have and join the council.

Judging from Schmid’s posted photo, the only requirement to serve is that you look whiter than Mike Pence. Oh, and there’s a couple of uniforms in the room with fancy stripes and everything. Because nothing will get marginalized communities of color to come running like white guys in uniform.

Community groups have responded with skepticism if not outright hostility toward Trump’s pledge to wipe out the HIV epidemic.

Housing Works released a statement referring to a plan already designed that could do the job just as well and faster. The Black AIDS Institute reminded us about Trump’s record with people of color. And a group of 22 HIV organizations have signed a letter pointing out that, with Medicare Part D (which covers medications) in peril and the rights of LGBTQ people being systematically stripped away, Trump has a lot of explaining to do before being taken seriously.

Did I mention that the deputy executive director of the AIDS Institute is Carl Schmid?

The very building blocks of an effective plan to end the HIV epidemic — confronting racism and homophobia, outreach to transgender women, providing proper sex education and access to HIV treatment and prevention — have never been embraced by the Trump administration and they never will be.

There are those who believe that this administration will do the right thing for LGBTQ and people of color. Some people hope that Trump’s next budget will reflect the “bold” lie he told about ending HIV that I can assure you he has already forgotten telling.

Some people pray the plan might actually help people, even accidentally. I am not one of those people.

The Trump administration is doing everything it can to dismantle the Affordable Care Act. It puts children in cages. It kicks transgender service members out of the military. It allows blatant discrimination based on hypocritical religious liberty.

I’m not willing to play nice when the lives of millions of people struggling to access healthcare and medications are at stake. I will not accept a lovely wrapped package from the Trump administration with nothing but empty promises inside.

Shame, shame, shame on any person or HIV organization who is willing to contort their beliefs in order to protect their governmental funding or to get a privileged seat at this rancid table.

Those of us who maintain our focus and integrity are watching this closely. We will know who humored Trump and we will remember it long after he is gone.

Mark S. King is the award winning writer of My Fabulous Disease. He has been nominated for a GLAAD award this year for his coverage of HIV/AIDS issues.