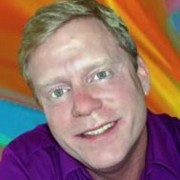 Mark S. King
Mark S. King is an award winning columnist, author, blogger and AIDS advocate who has been involved in gay causes since the early 1980′s. A graduate of the University of Houston, King founded "Telerotic," which became one of the largest gay telephone fantasy services in the country. King sold the company in 1986 as AIDS was beginning its devastation of the gay community. It is this period of time that King brings back to life in his memoir, A Place Like This. In 2007-2008, King was featured in the award-winning documentary "Meth." as a crystal methamphetamine addict in recovery. In 2011, he was honored to be included among the “POZ 100,” the 100 people and ideas that POZ Magazine finds most inspiring. Today, King lives in Atlanta. He continues his writing and blogs, and awakens with gratitude (almost) every morning.
1 2 3 … 5 Next »