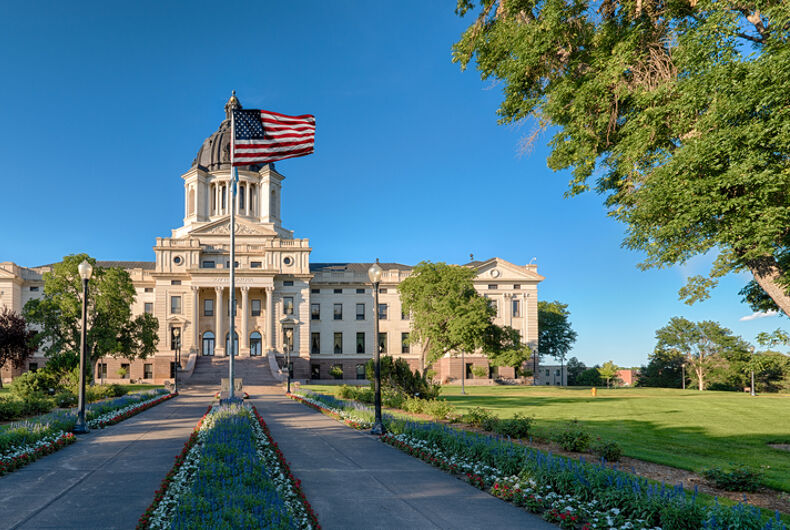 In a 10-3 vote, South Dakota has killed a second anti-transgender bill, HB 1205, sending it to the 41st day of their session. This means the bill will not have time to be passed by both chambers and will die.

“I’m very pleased with the result,” Libby Skarin, the policy director at ACLU of South Dakota told LGBTQ Nation. “We needed this win”

“Every single year that I have been here, we have faced bills that attack transgender people, said Skarin. “It has take a toll on the transgender population here.” Skarin has been with the ACLU in South Dakota for the past five years.

HB 1205 would have enhanced parental rights for parents of transgender youth, giving them the right to refuse consent if any health care treatment for their child would, “induce, confirm, or promote the child’s belief that the child’s sex or gender identity is different from the child’s sex presented at birth.” This would have included any counseling or psychiatric care.

Discussion on HB 2015 did not start until nearly 30 minutes before the end of the day’s session, with two speaking for the bill, and two opposing, including Senator Phil Jensen. Jensen was one of the lawmakers who introduced the bill.

Standing to oppose were Roger Tellinghuisen of the Human Rights Campaign, who pointed out that parents already have the right to determine their children’s healthcare, making this bill discriminatory against transgender children by singling them out.

Speaking second in opposition was Jenae Hansen from the South Dakota Chapter of the National Association of Social Workers. Hansen discussed the rates of self-harm and suicidal ideation amongst transgender kids, and how they increase when they are not supported.

A final proponent of the bill, Tonchi Weaver from South Dakota Citizens for Liberty spoke last, via phone. She muddied the water, saying that HB 1205 was a response to guidance given by the National Education Association (NEA) and GLSEN that schools should not inform parents if students tell them they are transgender. HB 1205, however, was not specific to schools.

Weaver went on to push the widely debunked “desistence” theory, claiming that 80-85% of transgender youth “grow out of it.” She also claimed the treatment of transgender kids is “experimental” and that treatment would leave children “sterile.”

Young trans people are generally treated with puberty blockers, which only delay puberty. They do not cause sterility.

In questioning, Representative Erin Healy asked for Weaver’s medical credentials. Weaver claimed to have none, only saying she was a parent, a grandparent, and had “researched” the issue.

After testimony, and a brief rebuttal by Senator Jensen, Representative Healy moved to defer the bill to the 41st day of the session — effectively killing the bill.

“I could go on all day about why this bill needs to go to the 41st day but I’m simply going to say that gender dysphoria is recognized by hospitals. Mayo has an entire clinic dedicated to helping trans people. This is simply unneeded and unnecessary,” said Healy.

Healy also noted that the state already has laws allowing parents to care for their children.

This is the second of four anti-transgender bills that South Dakota legislators will have before them in 2019. The first was SB 49, a ban on transgender student athletes, which died in mid-January.

“It’s extremely concerning to see this coordinated attack on transgender people in this state,” said Skarin. “This erases the humanity of transgender kids, and puts a target on kids who are already vulnerable.

Still pending are House Bill 1108 and House Bill 1225. HB 1108 would ban public schools from any discussion of gender identity or gender expression until grade 8, while HB 1225 is a second attempt to require transgender students to only engage in school athletic programs in their birth gender.

HB 1108 passed out of the education committee yesterday.