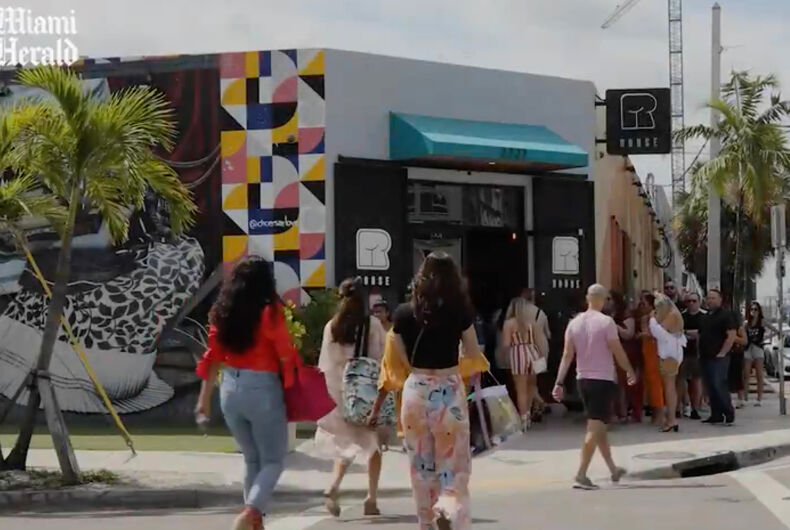 A Florida restaurant is being targeted by the state’s Department of Business and Professional Regulation after video of a drag performance at the establishment went viral.

Filed on Tuesday, the complaint seeks to have the R House, located in Miami’s Wynwood district, be declared a public nuisance and revoke its liquor license.

The complaint was filed after a DBPR investigation in which agents who visited R House claimed that minors were present at drag shows and noted the restaurant’s children’s menu, according to South Florida’s NBC 6.

The investigation reportedly stemmed from a video posted to TikTok and later share by anti-LGBTQ Twitter account Libs of TikTok in early July. The video shows a performer wearing pasties strutting through the restaurant with a child estimated to be between three and five years old.

“We are hopeful that Governor DeSantis, a vociferous supporter and champion of Florida’s hospitality industry and small businesses, will see this as what it is, a misunderstanding, and that the matter will be resolved positively and promptly,” R House said in a statement released on Wednesday.

“R House is an important institution to the Miami LGBTQ community and one of our most respected LGBTQ-owned small businesses. For years they have been an anchor of the internationally recognized Wynwood Arts District and have long been an inclusive space dedicated to bringing people together,” Equality Florida Senior Political Director Joe Saunders told the Los Angeles Blade in an email.

“We understand that their team is in receipt of the complaint and will be engaging with the State to understand the best path forward. We stand ready to support them, their LGBTQ staff, and our community at-large as we navigate a political environment made toxic by the governor and his political ambitions.”

“I’m sensitive to this, I’ve got a five-, a four-, and a two-year-old, my wife and I back home, and we get our money’s worth out of that. Being a parent is the most important thing we do,” Florida Gov. Ron DeSantis (R) said at a press conference on Wednesday.

DeSantis is one of several state officials who have attempted to crack down on family friendly LGBTQ events in recent weeks. Last month, after a Texas state Rep. Bryan Slaton (R) vowed to outlaw drag shows in the presence of children, DeSantis implied that he is open to using Florida’s child protective service laws to terminate the parental rights of adults who take their kids to see drag shows.

Republicans seem to be taking their cues from anti-LGBTQ social media accounts like Libs of TikTok, which are dedicated to painting the LGBTQ community as “groomers.” Drag performances have been a particular target recently, with conservative users posting misleading and out-of-context videos from drag brunches, while also conflating drag story time events in with other performances.

The online attacks have led to numerous incidents in recent weeks in which far-right hate groups have stormed family-friendly LGBTQ-themed programs at local libraries and other Pride events across the country.