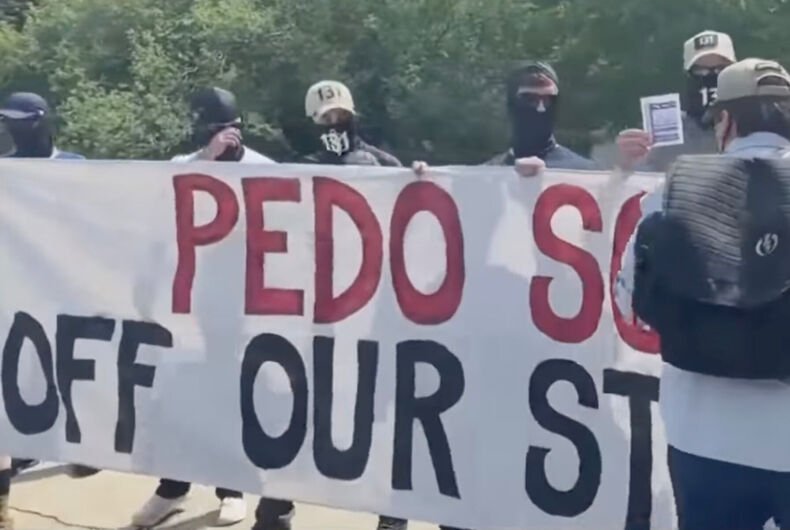 Three individuals were arrested Saturday during a Neo-Nazi protest of a drag story hour event in Boston. Members of the National Socialist Club (NSC-131) gathered across the street from Loring Greenough House, where the event was taking place, with a sign reading “Pedo Scum Off Our Streets.”

A fight broke out between the group’s founder, 23-year-old Chris Hood, and counter-protester Seth Rosenau, 27. Police broke up the fight and arrested both men on charges of disturbing the peace.

The Anti-Defamation League has identified the National Socialist Club as a white supremacist neo-Nazi hate group.

“It turned out they were calling people within the LGBTQ community pedophiles,” said Richie Cadet, who recorded video of the march. “They definitely were saying certain words that should never be said about anybody.”

The group reportedly chanted “Pedo scum off our streets” as police escorted children out of the event.

“Unfortunately, a group of masked neo-Nazis gathered just outside our fence to chant malicious and homophobic rhetoric,” the Loring Greenough House said in a statement. “The protest of a Drag Queen event was a tool to gain attention. Any concern for the well-being of children was absent.”

“It’s no coincidence that these cowardly groups from outside our city continue to target Boston as we showcase how representative leadership, empowered communities, and bold policies can have immediate impact. We are prepared and will not be intimidated in our work to make Boston a city for everyone. We remain ready for citywide deployment of extra public safety resources with a zero tolerance approach to any groups looking to intimidate or harass residents in our city,” Boston Mayor Michelle Wu (D) said in a statement.

In a statement, Massachusetts Gov. Charlie Baker (R) said that while the First Amendment rights of groups like NSC-131 would be respected, they are unwanted in the state. “The minute you start to engage in any activity that’s deemed to be violent, inappropriate, or hateful, people are going to stand up and get rid of you.”

Previously, far-right hate group Patriot Front staged a march in Boston over the Fourth of July weekend, assaulting at least one Black resident.

“The presence of white supremacists at a Jamaica Plain book reading today, like their downtown Boston march earlier this month, is at once a disgrace and a warning,” said Suffolk County District Attorney Kevin Hayden in a statement. “Society everywhere is targeted by these groups, and society everywhere must reject them.”