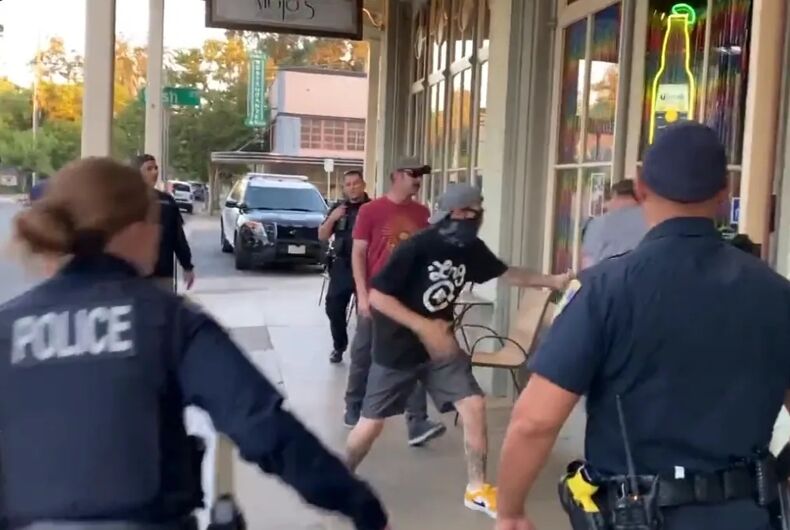 A viral video seems to show police in Woodland, California standing by as 10 Proud Boys try to break into a Thursday night drag show at Mojo’s Lounge and Bar.

The bar wanted to hold a drag performance to mark the end of Pride Month, but owner Christy Hayes initially canceled it after she found out that anti-LGBTQ groups had begun sharing the event’s details on social media, KCRA reported.

Related: Rachel Maddow compares Proud Boys to the Lesbian Avengers because their name is “really gay”

Hayes decided to throw the event anyway after she received support from the local community. Unfortunately, the Proud Boys showed up and disrupted it.

The viral video showed the thugs trying to break into the bar’s front door as police watched. The thugs yelled anti-LGBTQ slurs and called out Hayes by name. Someone inside the bar used pepper spray to drive the men away as they tried to smash the window. The men left without the police arresting anyone.

“It’s unfortunate that we had this incident,” Woodland Police Department Deputy Chief Anthony Cucchi told the news station. “People were here, upset about the bar having their Pride event. We tried to intervene as quickly as we could. It was a pretty chaotic scene…. Hate is not something that belongs in the city of Woodland.”

Hayes told the station, “There’s just a lot of mixed emotions about how great the night was to begin with and how much fun everyone had. It was so good to see people so happy and then to see the exact opposite. People were scared. People were angry. People were really upset. This isn’t what we wanted.”

The Proud Boys stepped up attacks on drag events during Pride month.

Proud Boys have also attempted to disrupt a Pride Month event at a library in McKinney, Texas. However, pro-LGBTQ activists and allies holding up rainbow flags and pro-LGBTQ signs successfully managed to block the Proud Boys from entering the building.

The hate group has been recently been designated as a terrorist organization in Canada and New Zealand.

Alleged Proud Boys members attempt to get into The Mojo in Woodland, CA and are met with pepper spray. The bar had planned an all ages Drag Show tonight, which was postponed due to security concerns pic.twitter.com/7Boln64uJ6

Same-sex marriages have swept the globe. Here is the current state of marriage equality

What’s the definition of genderqueer?