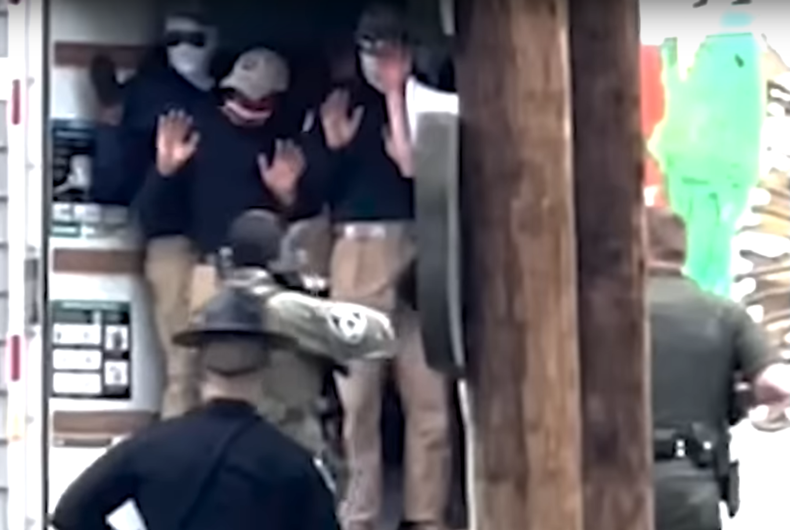 Patriot Front members were arrested as they exited their U-HaulPhoto: Screenshot

Police arrested 31 members of a white supremacist group near a Pride event in northern Idaho on Saturday. The men, identified as members of the white nationalist group Patriot Front, were armed with what appeared to be homemade riot gear and at least one smoke grenade, as well as a written plan to disrupt the Pride event and riot along Coeur d’Alene’s main commercial strip, according to multiple media reports.

“It is clear to us based on the gear that the individuals had with them, the stuff they had in their possession and in the U-Haul with them, along with paperwork that was seized from them, that they came to riot downtown,” Coeur d’Alene Police Chief Lee White said at a news conference over the weekend.

Police made the arrests after a concerned citizen reported seeing what looked like “a little army” loading into a U-Haul truck in the parking lot of a local hotel. Officers later stopped the truck in downtown Coeur d’Alene and found 31 Patriot Front members inside, including the group’s founder Thomas Ryan Rousseau of Grapevine, Texas.

According to reports, the men had traveled from at least 12 states and were all booked on a misdemeanor charge of conspiracy to riot.

Photos and video of the arrests show the 31 men in dressed in a uniform of identical khaki pants and dark blue shirts and wearing masks. The Anti-Defamation League identifies Patriot Front as a white supremacist group which promotes xenophobia, antisemitism, and fascism via the internet and engages in localized “flash demonstrations” across the country.

White said that law enforcement had been receiving information in the days leading up to the arrests about multiple groups intending to disrupt Saturday’s Pride event.

According to NPR, a group “led by a self-identifying Christian nationalist and attended by affiliates of the white nationalist America First movement” gathered nearby to pray, and a local motorcycle club had encouraged members to gather with firearms to protest the event. Men carrying guns walked around the park where the Pride event, organized by North Idaho Pride Alliance and attended by children, was taking place, while a conservative Christian group sang religious songs at a nearby picnic table and several other armed men unfurled an anti-LGBTQ banner.

“This event must serve as an alarm to the violent, anti-LGBTQ+ hate that is brewing across the country and showing up not just on the fringes but in state legislatures,” Rep. David Cicilline (D-RI), Chair of the Congressional LGBTQ+ Equality Caucus, wrote in a statement.

“This Pride Month cannot just be about celebrating our community, but also ensuring that every person can live authentically — without fear of discrimination or violence — in every corner of this nation.”

NEW: A U-Haul with masked neo-Nazi white supremacists was pulled over near a Pride event in Idaho— an officer said they were detained en masse on suspicion of conspiracy to riot and had weapons in the truck, per @thedailybeast. pic.twitter.com/ZYVOevggPG