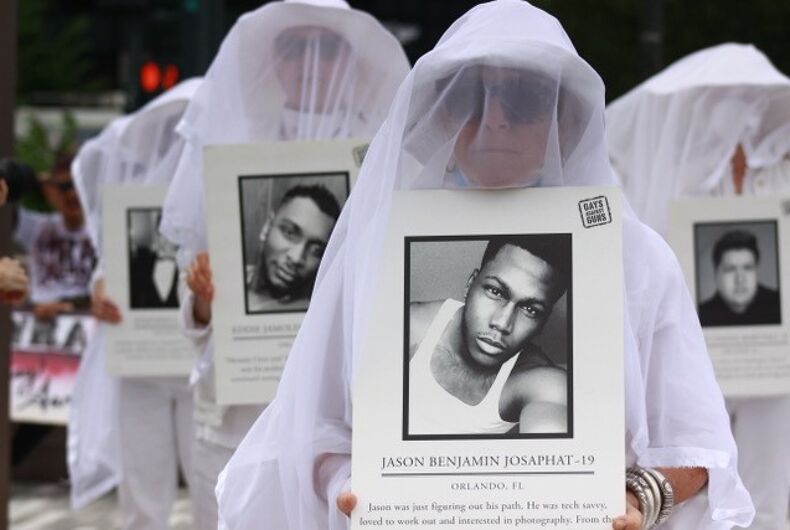 Gays Against Guns demonstrators wore white veils at a demonstration held in the memory of the Pulse shootingPhoto: Lana Leonard

On Sunday, June 12 numerous activists and volunteers of Gays Against Guns (GAG) — an LGBTQ-inclusive direct action anti-gun violence group — rallied in white-clad veiled outfits in memory of the 49 lives lost in Orlando’s Pulse nightclub massacre six years ago to the day on Little Island off the Westside Highway.

From 3:30 to 4:30 p.m., approximately 100 volunteers lined up holding a picture of a victim and their story. The faces of each volunteer left unseen beneath the white veils to redirect attention to those lost.

McGinn recalled six different actions taken within the last year alone. The LGBTQ anti-gun violence group organizes a protest at least 48 hours after every mass shooting with 10 or more victims, while outlining the hypocrisy of those holding public office. This is GAG’s vow, and they don’t see a resolution to mass shootings coming any time soon.

“We all formed at Stonewall because everyone showed up there six years ago,” said McGinn. “We would normally have our 49 human beings and have our vigil with our community, but this year there were just too many deaths.”

More than 300 people were murdered in mass shootings since 2016, outnumbering the volunteers strewn across the riverside.

“One thing that every single one of these mass shootings had in common was an AR-15 style assault weapon,” said Jay W. Walker, co-organizer of GAG, during the rally.

“As far as I’m concerned, the only thing that we need to be focusing on, at least for the present time, is an assault weapons ban, is demanding that these weapons be made illegal, that they be taken off the shelves,” said Walker.

The co-organizer’s words hinge on the possibility of the New York Supreme Court loosening the state’s strict gun laws; a decision that would increase the likelihood of mass shootings in New York, says Walker.

Kevin Hertzog, co-organizer of GAG, like McGinn, like Walker, showed up at Stonewall immediately after the Pulse massacre. He recalls the next day, a Monday, having a much more organized response by politicians and celebrities alike.

“Sunday’s response seemed so much more in touch with how I was feeling than the official response the following day,” recalled Hertzog. “It seemed to me it had gotten very co-opted by the powers that be.”

Hertzog started organizing meetings. Once his RSVP list filled his “little box” apartment to the brim, the meetings were moved to the LGBTQ Center downtown. GAG formed as a collective of people where each person was as responsible for the group’s founding as the next person, which is why he, Walker, and McGinn are all co-organizers of the group.

For more on GAG go to their website or volunteer at their upcoming Pride events.