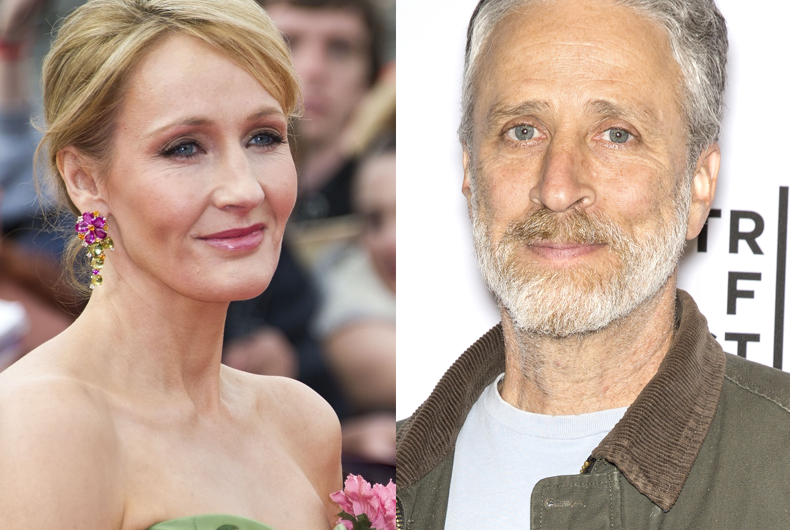 The former Daily Show host was speaking on his podcast The Problem with Jon Stewart when he brought up the Gringotts Wizarding Bank from the Harry Potter universe and compared the goblins who run the bank to a caricature found in The Protocols of the Elders of Zion, a piece of literature published in the early 20th century that helped popularize the conspiracy theory that an international cabal of Jews was running the world.

Related: The wizard sport Quidditch may rename itself to fly away from J.K. Rowling’s transphobia

“Hitler used the Protocols as a manual in his war to exterminate the Jews,” Holocaust historian Nora Levin once wrote. The book was described by Rutgers University Professor Stephen Eric Bronner as “probably the most influential work of antisemitism ever written.”

“I just want to show you a caricature,” Stewart, who is Jewish, told his co-hosts. He pointed to a copy of Protocols, saying that people he shows it to often mistake it for the goblin bankers in Harry Potter.

“J.K. Rowling was like, ‘Can we get these guys to run our bank?'” Stewart quipped.

“It’s a wizarding world! It’s a world where like, the train station has a half a thing and no one can see it, and we can ride dragons and you’ve got a pet owl…. Who should run the bank? Jews.”

“It was one of those things where I saw it on the screen and I was expecting the crowd to be like ‘Holy shit,'” Stewart continued. “She did not in a wizarding world just throw Jews in there to run the fucking underground bank.”

The goblin bankers have big, hooked noses, are secretive, have a special relationship with wealth, and are characterized as persecuted by society.

Rowling “came out” as transphobic nearly two years ago when she wrote about her support for Maya Forstater, a social justice nonprofit employee who lost her job for attacking transgender people. Forstater sued and lost her case since the court believed that her actions could create “an intimidating, hostile, degrading, humiliating or offensive environment.”

Rowling’s anti-transgender views have been cited by Republicans in the U.S. to attack LGBTQ rights. Both she and American evangelicals have portrayed transgender civil rights as somehow diminishing the rights of women.

Update: Jon Stewart now says that his two-minute rant was actually meant to be “light-hearted” and he doesn’t believe that J.K. Rowling is antisemitic.