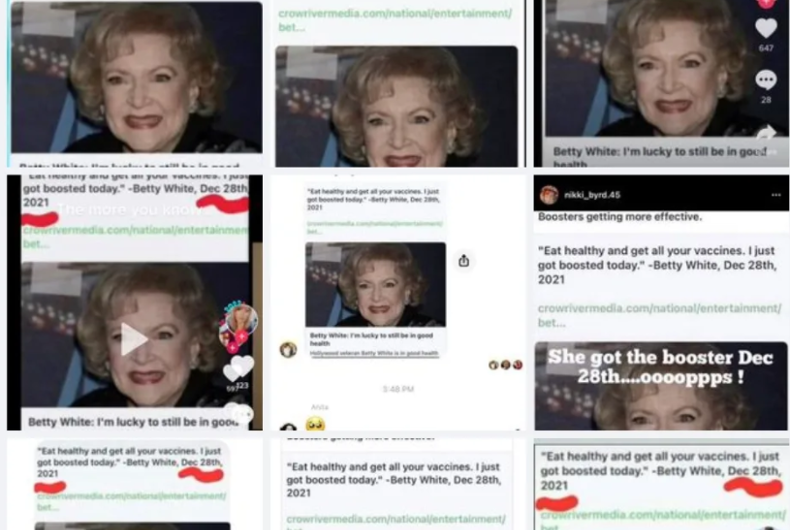 The meme of Betty White used a fake quotationPhoto: Screenshot/Snopes

Opponents of vaccination are now claiming that Golden Girl Betty White was killed by the COVID-19 booster, despite people who actually knew her saying that she died of natural causes.

“That’s just not true – 100% not true,” White’s agent and personal friend Jeff Witjas told the New York Daily News. “I do know for a fact that a booster was not involved at all in Betty’s passing…. Betty passed due to natural causes.”

The beloved actor, comedian, and long-time supporter of LGBTQ rights passed away at age 99 on December 31, 2021. She was in great health until near the end of her life, hosting SNL in her 90s and posing with muscular men for a benefits calendar in 2011.

Now anti-vaxxers made up a quotation from her in order to scare people out of getting a COVID-19 vaccine booster. According to the AP, people on social media are saying she said on December 28, just days before she passed: “Eat healthy and get all your vaccines. I just got boosted today.”

The AP makes it clear that the quotation is fabricated. It’s attributed to an interview on Minnesota news site Crow River Media, but that quotation doesn’t appear in the article. The AP dug through web archived versions of the interview and none of them had any mention of her getting a booster shot.

“Died 3 days later! Coincidence,” one person wrote on Twitter with a meme with the fake quotation.

Snopes, the internet myth-busting website, rates the quotation as “FALSE” and showed screenshots of dozens of social media messages with the fake quotation.

“In point of fact, the statements about vaccines and booster shots attributed to her have never appeared in any legitimate news media, nor did White make or repeat them on Twitter, or anywhere else,” Snopes writer David Emery explained.

Now people close to her are angry that her death is being used for malicious purposes.

“People can do what they want to do,” Witjas said. “But they shouldn’t hang it on Betty for any reason. It’s just not right. It’s not her legacy.”

“She was never a political person when she lived. I would certainly hate to see her become politicized in passing.”

Witjas also told the AP that White did not get the booster on December 28.

“If people truly believe that Betty passed away because of a COVID shot, a booster, they’re not going to go out and get it,” he said.

White was universally beloved, but she held a particularly special place in the heart of the queer community. Washington Blade writer Kathi Wolfe wrote in 2010 that this connection LGBTQ people felt to her stemmed from the struggles White has endured.

“She’s thrived through the Depression, World War II, divorce, the loss of her husband Allen Ludden (who she call[ed] the “love of her life”) and aging. We’ve carried on (and often prospered) in the midst of bigotry, rejection from our families, ostracism by our straight peers and AIDS. We identify with and respect survivors. Especially when they’re talented and funny.”

White was not only treasured by the LGBTQ community; she also stood up for us, speaking out in favor of marriage equality when it still wasn’t too popular to do so.

In 2010, White sat down with Parade magazine and declared her support for LGBTQ people.

“I don’t care who anybody sleeps with,” she said. “If a couple has been together all that time – and there are gay relationships that are more solid than some heterosexual ones – I think it’s fine if they want to get married. I don’t know how people can get so anti-something. Mind your own business, take care of your affairs, and don’t worry about other people so much.”

UK to pardon all past convictions of consensual homosexual activity