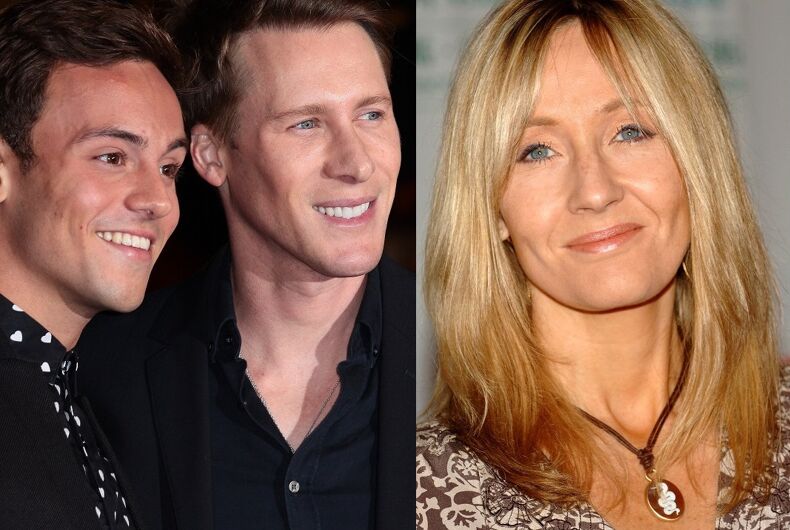 Out Olympic diver Tom Daley said in a recent interview that he can no longer enjoy Harry Potter because of J.K. Rowling statements about transgender people despite being a major fan for years.

Acknowledging her recent anti-trans comments and social media posts have made him wary, the out athlete feels that it is hard for him to talk about because Rowling has defended Daley online in the past.

Related: Voldemort can’t understand why everyone is so mean to J.K. Rowling

“I did always love J.K. Rowling’s books, but it does always leave a little bit of a…” Daley said when asked about his support for her by The Sunday Times. Columnist Charlotte Edwardes speculated that he wanted to finish the sentence by saying “bad taste.”

“The thing is, she stuck up for me in the past,” Daley explained, “but then what she said about trans people…. It’s one of the hardest things to understand, how trans people think and feel because she has never lived that experience, the same way white people trying to understand the Black experience will never be able to understand that.”

Edwardes asked what he would say to the author if they could talk face-to-face.

“It’s hard because I’m not someone who likes conflict, but I have strong views and beliefs. I guess it would be a conversation rather than a shouting match,” Daley responded.

“I always try to listen first and try to understand, and then try to share my point of view and my opinions and show how things [said] can hurt other people, to try to get the best outcome,” he concluded.

Daley has spoken many times on his love for the Harry Potter series, and even has a “Harry Potter scar” on his forehead he discussed in an interview with the Guardian in 2015.

He said that if he were to go on the BBC classic radio show Desert Island Discs again as he did in 2018, he wouldn’t choose Harry Potter and the Philosopher’s Stone as his favorite book again. This time, he would choose A New Earth by Eckhart Tolle.

Rowling previously defended Daley from anti-gay critics in 2016, when the Twitter account for a Christian lobbyist and prayer group used Daley’s performance in the 2016 Olympics to denounce his sexuality.

“Turning gay doesn’t seem to have done Tom Daley any favors,” they claimed.

“Can’t decide which is more offensive in this tweet, the stupidity or the spite,” Rowling responded.

Can't decide which is more offensive in this tweet, the stupidity or the spite. https://t.co/ksqZp17drc

Much has changed since then, most notably J.K. Rowling’s outspokenness about trans issues.

While Rowling has occasionally liked – and written – anti-transgender tweets over the past few years, her transphobia took center stage this past May when she liked an extreme tweet making fun of a transgender woman, tweeted an obscene and transphobic message at a nine-year-old fan, and finally in early June published a 3700-word essay about why she doesn’t like transgender women.

Since then, she has spent much of the last year defending her views on Twitter and getting condemned by celebrities who worked on the Harry Potter films while fansites cut ties with her, authors flee her literary agency, and writer Stephen King denounced her.

Out screenwriter and producer Dustin Lance Black, Daley’s husband of four years, had much harsher thoughts on Rowling that he shared late last year.

“J.K.’s work has always been jammed full of ‘borrowed’ old tropes,” Black tweeted in September. “It was just that she ‘borrowed’ tales many enjoyed revisiting.

Black is perhaps best known for writing the 2008 film Milk, for which he won an Academy Award. He eventually deleted the tweet.

The “new well” he spoke of was Rowling’s new book, Troubled Blood, a detective story published under her pen name Robert Galbraith. It is about two detectives who investigate “a transvestite serial killer,” effectively taking her political view that transgender women are a threat to cisgender women and turning it into a book.

Daley, meanwhile, is preparing to compete in this summer’s Olympics at Toyko, and the 26-year-old’s unsure if they will be his last Olympic games as a competitor or not.

Pete Buttigieg is winning over both Republicans & Democrats behind-the-scenes

How strongly does President Biden support LGBTQ rights? We asked the man who knows best.