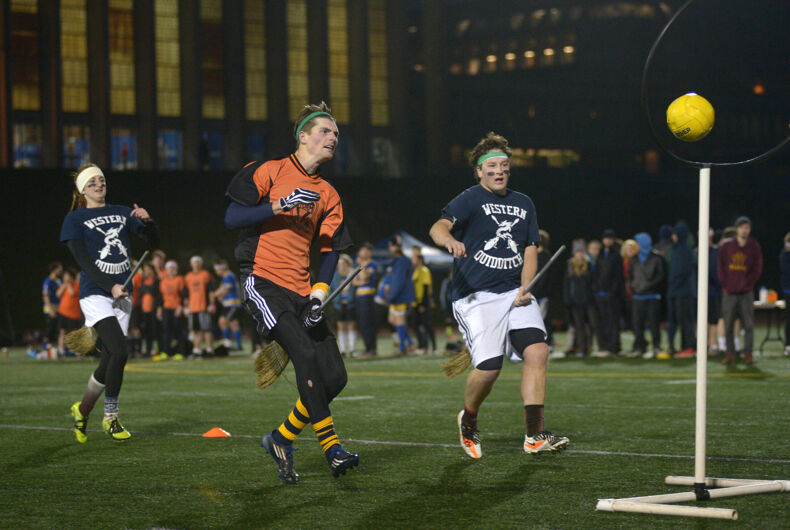 Quidditch, a sport played by wizards in the Harry Potter books of J.K. Rowling, may soon get a new name in the real world to disassociate itself from Rowling’s transphobia.

In a joint statement, two groups — U.S. Quidditch (USQ) and Major League Quidditch (MLQ) — said that they’re conducting a survey to decide on a new name for the sport’s real-life version. The statement specifically cites Rowling’s “anti-trans positions in recent years” as a reason behind its sought-after name change.

The statement also mentions that USQ and MLQ both follow an inclusive “gender maximum” rule. The rule forbids any team from having more than four players of the same gender on-field at the same time. This rule applies to those who identify as transgender and non-binary.

The inclusion of trans and non-binary players is part of the USQ’s Title 9 3/4 principle. The principle is named after Title IX, the 1972 federal law prohibiting sex-based discrimination, as well as Platform’s 9 3/4, the hidden platform in Rowling’s books where magic users can catch a train to the Hogwarts Academy for witches and wizards.

“Title IX additionally continues to exclude those who do not identify with the binary gender system,” the USQ’s website states. “Through Title 9 ¾, USQ is more inclusive to transgender and nonbinary individuals by using gender as opposed to sex in policies.”

“We understand that the process of transition is a very personal (and expensive) decision, and is influenced by many factors, none of which are, or should be, because a sport requires it,” the website adds. “USQ also hopes to be a positive example for other sports leagues as well as a way to positively influence how players view other genders.”

The joint statement also says that the groups seek to change the sport’s name to help it grow. The name “quidditch” is trademarked by Warner Brothers, the film studio behind the Harry Potter film adaptations. WB’s trademark limits the sport’s ability to gain sponsorships and broadcast without legal red tape.

To find a new name, USQ and MLQ are asking stakeholders to participate in a  survey that will remain open until January. USQ is the sport’s national governing body overseeing 3,500 athletes and 150 teams. MLQ is a national league overseeing an annual season of play involving North American 15 teams.

Rowling “came out” as transphobic nearly two years ago when she wrote about her support for Maya Forstater, a social justice nonprofit employee who lost her job for attacking transgender people. Forstater sued and lost her case since the court believed that her actions could create “an intimidating, hostile, degrading, humiliating or offensive environment.”

Rowling’s anti-transgender views have been cited by Republicans in the U.S. to attack LGBTQ rights. Both she and American evangelicals have portrayed transgender civil rights as somehow diminishing the rights of women.