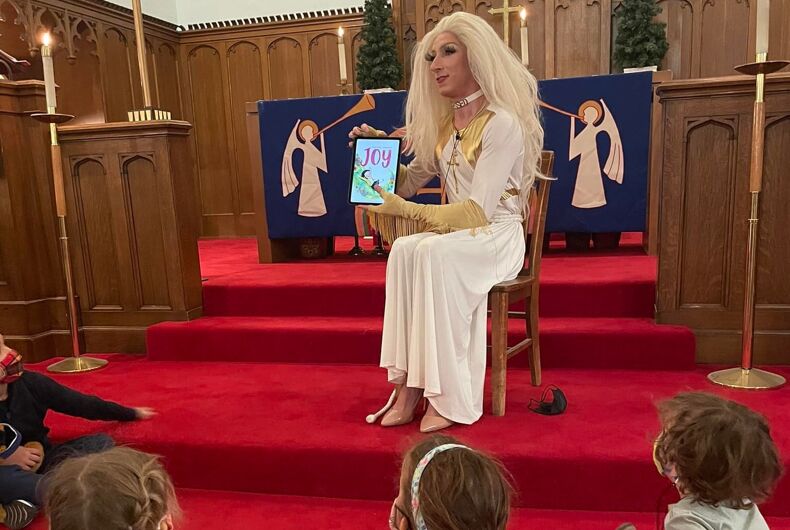 St. Luke’s Lutheran Church in Chicago, Illinois has received praise and condemnation after one of its male pastors delivered a sermon to children while dressed in drag.

In a public Facebook post, the church encouraged attendees of the Sunday service to wear clothing and accessories that made them feel like “the best version of yourself.”

In the post, Pastor Aaron Musser announced that he would be wearing drag in observance of “rejoice Sunday,” the sixth Sunday in Advent. Advent is the nearly month-long Christian season anticipating the Christmas birth of the religion’s messiah, Jesus Christ.

“I figured I would instead put on a dress as so many who have inspired me have done,” Musser wrote. “I decided to follow their example, showing that liberation from oppressive laws clears a path for joy.”

“It’s been so hard to know what that joy will be because it’s been so long since some of us have been joyful,” he continued. “It’s been a difficult and tiring couple of years. [Rejoice Sunday] is a chance for us to rehearse what a life of joy could look like. It’s a dress rehearsal.”

“Preaching in drag is a theological reflection on joy,” he added. “Joy overflows so abundantly, it can’t help but make itself known.”

During the service, Musser wore a blonde wig, makeup, and a white gown with gold tassels. He also read from a children’s book entitled Joy by Corrinne Averiss. In the book, a granddaughter tries to capture the laughter and happiness that she witnesses in a park in order to cheer up her depressed grandmother.

The book concludes with the grandmother telling her granddaughter, “You don’t need a tin or a box or a net to bring me joy. You bring me all the joy in the world just by being you.”

After the service, Musser wrote, “Allowing yourself to feel joy can be scary. I wasn’t sure how the outside world would handle me when they saw me this morning. Joy is difficult to feel, it’s vulnerable. But isn’t it so beautiful?”

But such critics of drag aren’t interested in Musser’s larger lesson on joy. They’re more intent on furthering the dangerous narrative that LGBTQ people seek to “recruit” and sexually exploit children. The narrative seeks to turn the community violently against queer people in order to “protect” children, but such anti-LGBTQ messaging often compels queer kids to harm others and themselves.

The wizard sport Quidditch may rename itself to fly away from J.K. Rowling’s transphobia

Senate confirms gay man as ambassador to Cameroon. Homosexuality is still illegal there.