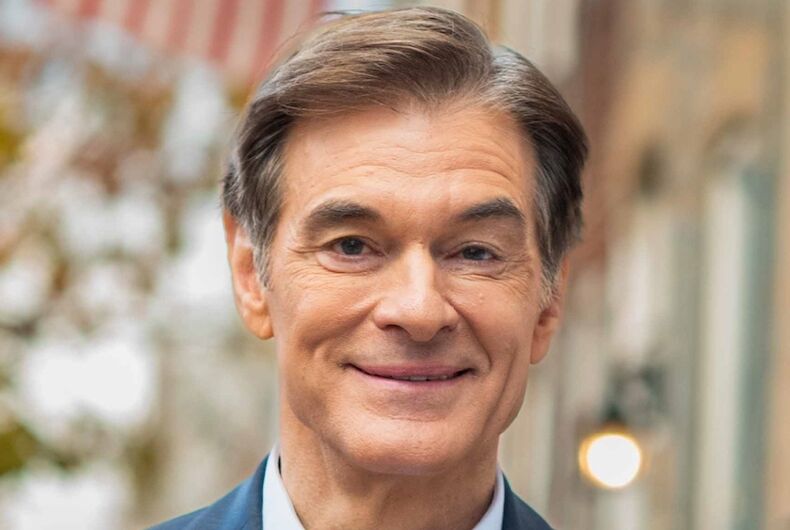 Dr. Mehmet Oz has only been a U.S. Senate candidate for three weeks, but his campaign has already suffered its first major leak and controversy. Leaked recordings of Oz reveal that — like failed California gubernatorial candidate Caitlyn Jenner — the television personality-turned-Republican hopeful’s made his first major policy statements about trans people.

Oz went on a confusing, conflicting diatribe while claiming he had to share things about trans issues he “definitely couldn’t have said” on his daytime television show. That ranged between complaints that it’s “not fair” to only “protect one group of people” to a defense of “feminists” from “cancel culture,” such as the “very brave” anti-trans author J.K. Rowling.

The remarks were reportedly made on December 16, when Oz was conversing with attendees of a private lunch in New York City. Audio from the event was leaked and obtained by RadarOnline.

Oz was asked what he thought about Lia Thomas, a trans woman and swimmer at the University of Pennsylvania, and his position on trans issues overall. He begins by bringing up the suicide rates of trans people as evidence that “compassion” is needed to deal with the “diluted” issue.

“The transgender issue is kind of diluted a little bit. The suicide rate amongst transgender adults has grown [inaudible],” the Republican candidate said. “This is critical to understand. We have to have compassion on this problem. It is a devastating one.”

Then he explained that trans people “have to figure out” whether they want to stay closeted and “keep living the lie – they don’t think they’re who they are,” or come out and “be who they truly are.”

Oz’s response only went further downhill from there, as he began pushing anti-trans rhetoric, claiming it’s ‘unfair’ for them to participate in sports. “Then you layer on top of that changes to our society that hurt other people in an effort to protect one group of people, and that’s not fair. That’s not fair,” he told his audience.

Then, he suggested that “feminists” are being harmed by trans inclusion. “Feminists have very eloquently fought for the ability to have women’s sports be on equal [inaudible] as men’s sports, and this takes away that ability,” he said.

“I would argue that what I just said can’t be said – I definitely couldn’t have said it on [The Dr. Oz Show] – and you need to be able to say those things.”

Oz claimed, “[This is] not about being hateful or harmful. I’m not trying to make anyone’s life miserable. I’m respectful of how difficult it is. But we have to be able to say these things in America.”

Then he finally attempts an answer at the issue, Oz says that when it comes to trans athletes, “There might be some cases where it doesn’t matter.” But, “If you’re a bodybuilder or weightlifter, it matters.”

“J.K. Rowling, who’s not some icon of the conservative party, said something that I think was very brave. She was a lifelong feminist, and then she’s canceled,” he claimed about the author worth at least $670 million in 2020 and with tens of millions of followers online.

Not only does Oz think Rowling is “canceled,” but he further claims, “I’ve talked to people who are canceling her, who would’ve been making a lot of money off her, and they can’t defend what they’re doing, or they don’t wanna be in trouble.”

These unnamed people “canceling” Rowling are likely not involved with the Harry Potter film franchise’s 20th anniversary reunion set for release on January 1, at least one upcoming Harry Potter scripted series planned for HBO Max, the ongoing Broadway production of Harry Potter and the Cursed Child, the currently-airing BBC series Strike, the Fantastic Beasts: The Secrets of Dumbledore film coming out next year, or the upcoming video game Hogwarts Legacy, all of which involve Rowling, or are derived from her writings.

Oz also tries comparing the “canceled” Rowling to “brave” Americans. “And as a brave American, you have to be willing to get into trouble,” he stated. “That’s what makes us different.”

Then, he makes an even more befuddling comparison next: Radar reports he made “a rather unexpected comment” by bringing up Oprah Winfrey immediately after.

“I talked to Oprah, she’s a friend,” he began, “and we have friends with different perspectives.”

He goes on to clarify, “And we should! You don’t wanna just be in a bubble with people who think exactly like you. That’s pretty boring.”

Then, he shares what he allegedly asked his fellow semi-retired television host: “I asked her to stay out.”

Oz claims he told her, “Don’t support me because, if you get involved in any way, you’ll get hurt. And I don’t want my friends hurt.”

He told his family the same thing. “I told my kids, ‘Stay out of it. If you see things you know are false, don’t go for the bait. Stay out of it.’ Even my wife’s family, who are very active politically,” he said, referring to his wife Lisa Lemole Oz and her parents, philanthropists Emily Lemole and Dr. Gerald Lemole, all members of the Asplundh family of billionaires.

“I said, ‘Just don’t get in the way because, if you get on your knee, they’ll pull you down. They can’t say anything more negative than they already are saying now,'” Oz claimed.

Dr. Mehmet Oz announced his candidacy for the Republican nomination for the U.S. Senate from Pennsylvania in late November. He is aiming to take over the seat currently held by Sen. Pat Toomey (R-PA), who is retiring, in 2022.

There was one main issue that Oz initially had as a candidate: he doesn’t live in Pennsylvania. In fact, he lives across the river from New York City, in New Jersey. He only bought a home in the Keystone State right after the launch of his campaign.

Now it seems that Oz is ready to embark on a new issue: pushing back against “cancel culture” while denouncing trans inclusion as “unfair” or something that “hurts” women.

Oz’s comments regarding Thomas is the latest in a number of attacks on the college senior, who experienced success in swimming competitions both before coming out and after, but is being denounced by conservatives anyhow.

The Dr. Oz Show, where Oz claims he “definitely” couldn’t talk freely about trans people or feminism, was scheduled to air through 2023 before his decision to run for office. Now the show will come to a sudden end after season 13, which concludes next month.

Oz, a cardiac surgeon, regularly denounced vaccine mandates and other pandemic restrictions. He also called on Fox News viewers to join in an at-home hydroxychloroquine clinical trial, despite the CDC’s insistent recommendation against using it as treatment for coronavirus.

Oz, who is not an epidemiologist or virologist, has claimed that “COVID-19 became an excuse for the government and elite thinkers who controlled the means of communication to suspend debate.”

Unfortunately, COVID isn’t the only thing Oz has been wrong about. In 2012, he aired a program that looked at “both sides” of reparative therapy, the harmful practice based on the discredited claim that gay people can be “cured” of their homosexuality.

He subsequently said in a blog post that he thought that the form of psychological torture was “harmful,” but he never said as much on the more widely watched show.

Anti-LGBTQ Republican dies after getting COVID while abroad & disappearing after