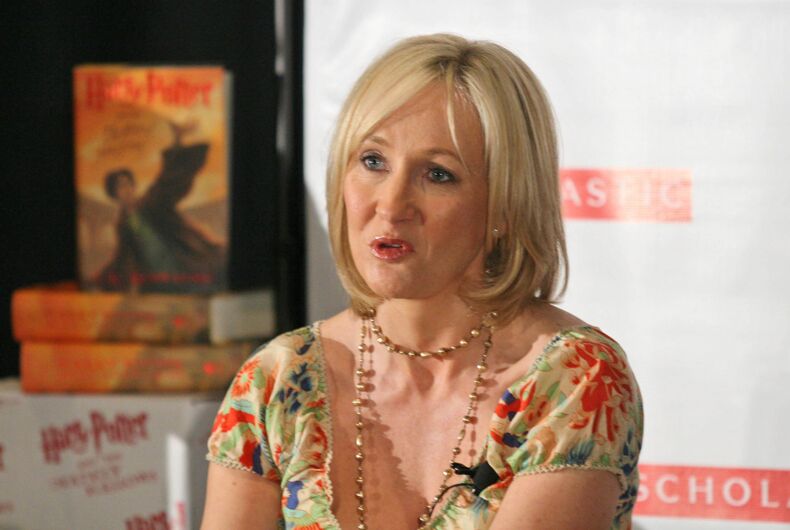 Harry Potter author J.K. Rowling has a long history of transphobia. She has repeatedly attacked the validity of trans identities, portrayed trans women as threats to cis women’s safety, and even promoted vile merchandise with anti-transgender messages.

Now she’s taken to Twitter to paint trans women as rapists and civil rights as nonsensical. Now fans have started asking, has the author turned into one of her worst characters, Delores Umbridge?

“War is Peace. Freedom is Slavery. Ignorance is Strength,” Rowling tweeted along with a link to an article about transgender prisoners. “The Penised Individual Who Raped You Is a Woman.”

The article criticizes Scottish police for honoring a prisoner’s gender identity. It portrays being trans as something you can claim to avoid punishment and gain access to the vulnerable since it includes those women who haven’t surgically transitioned. A transgender person would need to show they have been consistently living as the opposite sex for a period of time to qualify.

Completely overlooking the stunning fact that women cannot be charged with rape in Scotland, Rowling – and the article’s author – argue that without a penis a person cannot be raped. This would run afoul of laws in America that allow women to be charged for forcing someone to have sex, having sex with a minor and an intoxicated or impaired person.

Rowling’s anti-transgender views have been cited by Republicans in the U.S. to attack LGBTQ rights. Both she and American evangelicals have portrayed transgender civil rights as somehow diminishing the rights of women

Responses from other users to Rowling’s tweet showed that she was in the minority when it comes to antiquated views on trans rights, but one stood out from the rest.

“Jesus,” the user wrote. “You just double down on hate regularly? I didn’t realize that Dolores Umbridge was autobiographical.”

“Right?” another replied. “Like how could someone who wrote such a beautiful world turn into their worst character? I’ll never understand it.”

“Great knowing the author of my childhood obsession hates my existence,” yet another user responded to Rowling.

“So terribly sorry, my trans daughter feels the same,” someone replied to them. “It breaks my heart for all the fans that trusted her.”

“I know it shouldn’t by now, but it never ceases to disappoint me to see what you’ve become,” Amanda Jetté Knox responded to Rowling. “You’ll argue you’re just speaking common sense or defending women, but what you’re actually doing is using those ideas as excuses to hate on and attack a marginalized community. It’s sad.”

“And I’m not just talking this time, this tweet, but many times for a long while. You had an incredible opportunity to do good with the privilege and success you have. You could have chosen differently. But this is what you’ve chosen and you’ve broken a lot of hearts.”

So terribly sorry, my trans daughter feels the same. It breaks my heart for all the fans that trusted her. 💗

And I’m not just talking this time, this tweet, but many times for a long while. You had an incredible opportunity to do good with the privilege and success you have. You could have chosen differently. But this is what you’ve chosen, and you’ve broken a lot of hearts.

Right? Like how could someone who wrote such a beautiful world turn into their worst character? I'll never understand it.